All Aboard the Latest Golf Sensation 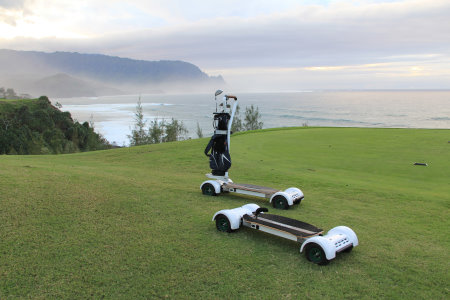 British golfers will soon be able to test officially the hottest new product launched at this year’s PGA Merchandise Show in Orlando, Florida.

Hertfordshire-based Frasercorp Ltd have signed an exclusive agreement with SolBoards Inc of Sisters, Oregon, to distribute the exciting new 4WD GolfBoard™ single person golf transport vehicle in the UK and they expect it to be as big a hit here as it has become on the other side of the Atlantic.

The new 4WD GolfBoard adds a whole new element to the royal and ancient game. It is powered by an advanced rechargeable lithium-ion battery and gives the user the feeling of surfboarding round the golf course. Recharge time is as little as two hours.

“I think the GolfBoard definitely creates the opportunity to experience the terrain from a whole new perspective,” said US surfing and fitness legend and GolfBoard Design Consultant, Laird Hamilton. It lets you experience the course in a way that you have never done before.”

“When I’m out on the course I feel like in the summertime I’m still snowboarding but I’m playing golf at the same time,” agreed Don Wildman, Founder of Bally Total Fitness and GolfBoard Product Advisor. “It’s like a win-win deal.”

The GolfBoard makes getting from one shot to the next almost as exciting as hitting a 300-yard drive or draining a putt from 30-feet. It will speed up the game but will also cause less compaction on a golf course than a traditional cart.

The revolutionary new product is as simple to use as riding a bike. All you have to do is to step onto the board, grab the lightweight ergonomic controller and go. The wireless hand-held controller allows you to accelerate and break while the rider’s body movement controls the steering.

While using a GolfBoard a golfer can either carry his golf bag over his shoulder as normal or else fit it to a special bag mount/stability handle which can be attached to the front of the vehicle. The former will be preferable to some because by electing to carry the bag you engage your core and balance and transform golf into a full body work-out. However the latter requires less effort and the stability handle will also allow inexperienced users to build their confidence while getting used to driving their GolfBoard around the course.

With a compact size of just 50” x 20” x 10” the GolfBoard is easy to store and takes up minimal space in the boot of the car.

“It is a fantastic new product and I’m proud and excited to be introducing it into the UK market,” confirmed Justin Fraser Jones, Director of Frasercorp Ltd. “Recently, I was fortunate enough to visit the GolfBoard team in America and got the chance to play a round of golf while using one.

“I can confirm it was hugely enjoyable and I genuinely believe GolfBoard will prove popular with current golfers and also bring a new generation of youngsters into the game.”

The recommended retail price for a GolfBoard is to be £2,829 plus VAT and a lease deal for clubs is also available. Further information is available from Frasercorp Ltd, Unit 8, The Finches, Hertfordshire, England, SG13 7TB. Telephone + 44 (0) 1992 302082. Email golfboard@frasercorp.co.uk. Special deals for PGA professional are available. Further information on the golf board can be found at www.frasercorp.co.uk