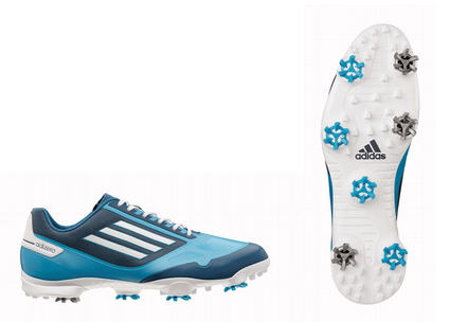 adidas Golf, an industry leader in innovation, technology and performance footwear, has announced the release of the next generation of adizero golf footwear, highlighted by the radically new adizero one.

To sustain the astounding success realised by adizero Tour in 2013, adidas Golf designers were challenged with taking the next step in the evolution of the franchise; to develop a lighter shoe that pushed innovation to the next level whilst delivering maximum performance and Tour-level traction. The result is adizero one, a visually appealing design that tips the scales at only 272 grams, 10% lighter than the adizero Tour. With adizero one, adidas Golf has taken adizero footwear to a new level of light, delivering more stability than ever before in the lightest cleated performance golf shoe the company has ever created.

“When I first saw the adizero one, I couldn’t wait to get them on my feet,” said Jason Day, adidas Golf Tour staff professional since 2006. “With the low profile design, I can really feel the ground beneath my feet and the power generated from my swing is definitely noticeable. I’m excited to wear these on Tour.”

While traditional golf shoe construction requires the stitching of multiple layers, adidas golf designers pushed the limits of engineering to create a new, ultra-light one-piece fused upper that bonds together five layers to deliver a consistent glove-like fit on the foot.

“We’re constantly looking to test the boundaries of engineering to design and develop equipment that helps golfers perform at their peak,” said Masun Denison, Director, Global Product Marketing, Footwear at adidas Golf. “adizero one is a perfect example of our relentless pursuit of innovation to consistently create the best-performing footwear in golf.”

For women, adidas Golf has designed the adizero Tour II, utilising many of the same design and fabrication elements as the adizero one in a streamlined, six-spike configuration with thintech low-profile technology to improve traction and stability. Available 23rd January 2014, the women’s adizero Tour II is available in three colourways at an RRP of £89.99, 129€, 1.200SEK, 1.100NOK, 1.000DKK and 179CHF.

Also available for both men and women on 23rd January is adizero sport II, made with ultra-lightweight performance mesh upper now featuring proprietary climaproof protection and a two-year waterproof warranty. The shoe also features a new SPRINTFRAME™ outsole with spikeless puremotion technology for enhanced flexibility and comfort with swing plane traction for increased grip and stability. adizero sport II is available in four colourways for men and women at an RRP of £79.99, 109€, 1.100SEK, 900NOK, 900DKK and 149CHF.