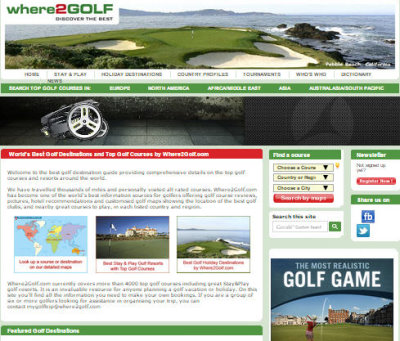 The R&A’s decision to cease publication of the annual Golfer’s Handbook came as a surprise to many. The end of the ‘Golfer’s Wisden’ was barely publicised. But the demise of the Handbook, first published in 1899, doesn’t mean the end of ‘at your fingertips’ golf information. Other information sources, like Where2Golf.com, also cover many of the areas that were previously the staple of the “bible of golf”.

The R&A Golfer’s Handbook, published for the last time after 111 editions, was a cherished resource, full of interesting facts, figures and articles about the Royal and Ancient game. It contained a Who’s Who of golf, tournament histories going back to 1860, and information about golf clubs in the UK, Europe and beyond. These areas are also comprehensively covered by the wealth of information that is offered by Where2Golf.com, and there’s no charge for accessing this online content.

Where2Golf.com is one of the leading online guides to the world’s top golf courses. This golf information website covers the best 4,000 or so golf courses across the globe. In addition, Where2Golf offers an encyclopaedic reference section on tournaments, players and personalities, and a dictionary of golfing terms.

In Where2Golf’s Tournaments section you’ll find information on all the top professional tournaments on the US PGA, European, LPGA, LET, Asian and Seniors Tours. There’s also coverage of the world’s most prestigious amateur and team events. As with the Golfer’s Handbooks this coverage reaches back to 1860, when the first Open Championship was played.

The Who’s Who section in Where2Golf not only includes the world’s greatest players, but also celebrated golf course designers such as Harry Colt, Alister MacKenzie and the Dye, Fazio and Jones “dynasties”. Golf commentators like Peter Alliss and equipment makers such as Karsten Solheim are also featured.

A golf dictionary is included on the site, covering the game’s most commonly used terms – both ancient and modern. This helpful resource offers a first step in trying to demystify the often baffling lexicon of golf.