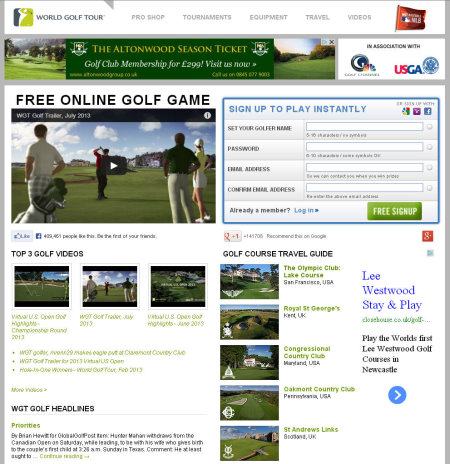 First launched in 2009, the Virtual U.S. Open is available free-of-charge to golf fans who want to experience the excitement of the U.S. Open Championship. The USGA and WGT work in partnership each year to model and create digitized versions of U.S. Open courses in precise detail, including Merion Golf Club’s East Course, the 2013 host course, and The Olympic Club’s Lake Course, the 2012 host course. The games are available by visiting www.usopen.com or www.wgt.com

“The growth of the Virtual U.S. Open over the past five years confirms for us that golfers want to have a deeper experience with our national championship,” said Sarah Hirshland, senior managing director of business affairs for the USGA. “World Golf Tour complements our other digital programming by giving golfers and golf fans a unique way to truly play the course, providing a more meaningful appreciation of the real-world event.”

“The USGA deserves credit for pioneering the concept of a virtual championship way back in 2008,” said Lincoln Silver, vice president of business development for WGT. “They realized early on that golf fans would want to experience their championships in many ways: on-site, on television, on their computer, and on their mobile phone – including actually being able to play the course digitally.”

World Golf Tour has already photographed Pinehurst No. 2, the legendary course that will host the 2014 U.S. Open and U.S. Women’s Open Championships. The game will reflect the current features of Pinehurst No. 2, following recent renovations by golf course architects Bill Coore and Ben Crenshaw to restore the natural and strategic characteristics of the original Donald Ross design.

“The WGT team was here this May and we’re excited to see how they bring Pinehurst No. 2 to life in the game for the men’s and women’s championships next year,” said Tom Pashley, executive vice president of the Pinehurst Resort & Country Club.

The back-to-back Opens will be the seventh and eighth USGA championships to be conducted at Pinehurst No. 2 and will mark the first time the U.S. Open and U.S. Women’s Open Championships will be played on the same course in consecutive weeks.