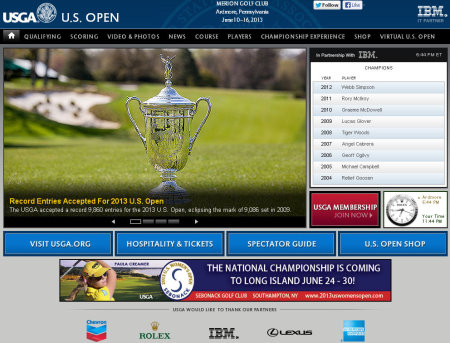 The United States Golf Association (USGA) has launched usopen.com, the official website of the 113th U.S. Open Championship, which will be played at Merion Golf Club in Ardmore, Pa., June 13-16. With enhanced design and functionality, usopen.com will entertain, inform and engage fans with superior digital coverage of one of golf’s premier championships.

Powered by IBM cloud computing and analytics technologies, usopen.com includes several new features and enhancements designed to bring fans closer to all of the on-course action. The U.S. Open suite of digital products for 2013 also features a new iPad app designed and developed by IBM that will deliver live video, real-time scores, news and highlights throughout the championship.

A redesigned video console, produced in partnership with American Express, will provide fans with an interactive experience that includes live coverage of marquee groups and selected holes throughout the U.S. Open. Users can participate in the U.S. Open Tweet Stream by chatting along with USGA experts and fellow U.S. Open fans using #AmexGolf.

Enhancements to live scoring will enable users to track their favorite golfers by creating a personalized leaderboard with up to five competitors.

The 2013 design of usopen.com further integrates social media platforms, featuring aggregated tweets from @usopengolf and @USGA, as well as those of selected players and broadcasters. Fans who use the #usopenpresspass hashtag will have the opportunity to submit post-round questions for U.S. Open competitors.

“Creating increased interactive and social elements was a priority for usopen.com for 2013,” said Sarah Hirshland, USGA senior managing director of business affairs. “Through our collaboration with IBM and American Express, we continue to connect fans to the U.S. Open through a robust suite of digital products. We are committed to continually enhancing our site to bring the best of the U.S. Open experience to golf fans around the world.”

“We’re bringing golf fans closer to the U.S. Open Championship through a combination of innovative technologies designed to showcase the action and excitement on the course,” said Rick Singer, vice president of client executive marketing for IBM, the USGA’s technology partner. “The immersive U.S. Open digital experience will enable fans to follow the championship live on the Web or their mobile device and feel as though they are at Merion Golf Club watching their favorite player compete.”

The U.S. Open experience will extend beyond the championship proper. For the first time, usopen.com will provide live second-round, hole-by-hole scoring from the 11 domestic U.S. Open sectional qualifying sites on Monday, June 3. The upgraded scoring system will allow fans to track players’ progress as they attempt to earn a place in the field at Merion.

Among the new features on usopen.com for 2013:

“Our continued investment in the USGA’s digital offerings is a reflection of the growing demand for information and interaction with the championship from fans around the world,” said Hirshland. “We designed usopen.com to be the hub for enthusiasts to get up-to-date information and statistics while watching the live action from America’s premier golf championship.”

PSP Media Group Ltd, organisers of the Scottish Golf Show, have hailed the first-ever virtual edition of the event a 'massive success', with over 6,700 log-ins during the course of the two-day show.