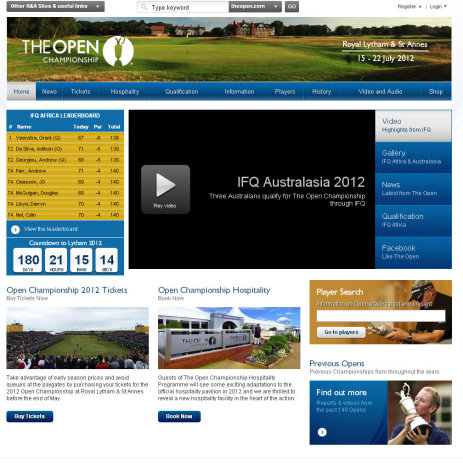 The redesigned official website of The Open Championship was unveiled at Open 2012 International Final Qualifying (IFQ) in South Africa.

TheOpen.com boasts a host of new features that will offer the best possible online coverage of golf’s oldest Major.

Fans can now watch live action with the popular three-hole channel, go behind-the-scenes with @TheOpen LIVE, keep track of scores, social media feeds and the latest breaking news all on TheOpen.com homepage. It means there will be no excuse for missing a single shot of The Open 2012.

The improved website is part of an increasing online presence that includes Android and Apple (iOs) apps as well as regularly updated year round Facebook and Twitter feeds, meaning followers can keep up-to-date no matter where they are in the world.

The R&A’s Communications DirectorMalcolm Boothsaid: “TheOpen.com has been designed to ensure fans have the essential information they need – up-to-date scores, live action and the best of social media – all instantly available on the homepage.

“The Open is about much more than four days in July. Fans can follow qualifying today in Africa with stops in Asia and theUSbefore final qualifying inBritainin June and July.”

Over the coming months a host of new features will be introduced to help both on-course spectators and armchair fans plan their personal Open experience well in advance.

Fans can monitor who has made it into the final field of 156 with individual player profiles along with the latest news, blogs and exclusive in-depth features. Visitors can delve into the archives, read reports on all 140 previous Championships and view footage from Opens dating as far back as 1914.

The website can also be used to buy exclusive merchandise, order tickets and book hospitality packages.