‘The Hitler Trophy’: Golf and the Olympic Games 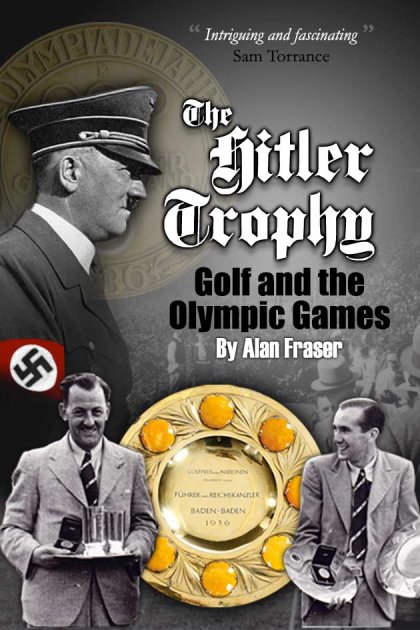 ‘The Hitler Trophy’: Golf and the Olympic Games by Alan Fraser.

Golf was chosen to return to the Olympic Games in Rio de Janeiro 2016 for the first time since St Louis 1904. Actually, it did make another little-known appearance – around the notorious Berlin Games of 1936.

A tournament was sanctioned by Adolf Hitler himself, to take place in the German spa town of Baden-Baden, with the Fuhrer’s imprint even going on the trophy. What happened next, as two plucky Englishmen sought to bring home that distinctive trophy, became an intriguing tale that would bring embarrassment amid the rise of Nazism and then World War Two.

Brilliantly researched and beautifully written by seasoned golf writer Alan Fraser, The Hitler Trophy tells also of the sport’s history – and future – at the Olympics.

Until his recent retirement from full-time journalism, Alan Fraser was one of Fleet Street’s leading sports writers. Golf has been a passion and a speciality. He says, “The book includes all you need to know for historical reference about golf’s appearance in the 1900 and 1904 Olympic Games. There are also chapters on why the 1908 event was cancelled, ditto 1916 and 1920, and attempts since the 1970s to have golf readmitted to Games. The stories behind the IOC’s decision to add golf to the Rio schedule and the building of the new golf course are also covered.

‘The central theme of the book regards a trophy donated by Adolf Hitler for a tournament which he and the German hierarchy hoped would be included in the Berlin Olympics of 1936. Despite the refusal of the IOC, the tournament went ahead in Baden-Baden immediately following the end of the Olympics.

‘I write about the event itself, England’s participation (not the UK), how they came from behind to deny Germany, and Hitler’s wrath at the outcome; how the trophy returned to England, became ‘unwanted’ on the outbreak _ and in the aftermath _ of war and was eventually ‘lost’; how it was recovered and eventually sold at auction.

The book (£9.99 paperback) can be ordered through book shops and amazon