Speaking today author Roger McStravick from St Andrews said, “This is unbelievable. It has been an incredible year – first the Herbert Warren Wind Award and now this. To be shortlisted is a great honour.”

The critically acclaimed book that details the golfing history of St Andrews, set to the backdrop of the life of four-times Open Champion Old Tom Morris, has been called ‘a golfing masterpiece’ and ‘the best St Andrews book in 160 years’ by the press. Designed by Chic Harper, the self-published book is as artistic as it is informative.

Scotland’s Minister for Public Health and Sport, Aileen Campbell, today added, “I am delighted that St Andrews In The Footsteps of Old Tom Morris by Roger McStravick has been shortlisted at the Cross Sports Book Awards. The story of how St Andrews became the Home of Golf is a fascinating chapter in the history of Scottish sport, and Old Tom Morris is one of our greatest sporting icons. I wish Roger well at the awards night at Lords in June.” 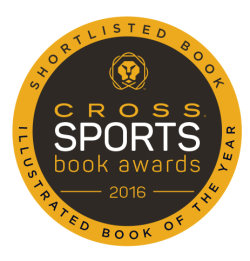 David Willis, Chairman of Cross Sports Book Awards said, “Congratulations to Roger for this remarkable book. It is a wonderful piece of work and fully deserves to be shortlisted for Cross Sports Book Awards 2016 in the Illustrated Book of the Year category. In addition to the unprecedented amount of research put into the book, the stunning rare 19th century photographs and paintings are a visual delight for golfers and non-golfers alike.”

The Cross Sports Book Awards event takes place on 1 June 2016 at Lord’s Cricket Ground and is broadcast on Sky Sports.

Roger concluded, “When I was researching Footsteps, it never dawned on me that the book might take me to Augusta or Lords. This is a huge surprise and is largely due to the support and counsel of organisations such as The R&A, the St Andrews Preservation Trust, University of St Andrews and people like David Joy, Angela Howe, Peter Crabtree, David Hamilton, Dr Eve Soulsby and of course designer Chic Harper. I sincerely hope my self-publishing story will encourage other would-be writers.”

“St Andrews In The Footsteps of Old Tom Morris” www.thegolfbookshop.com