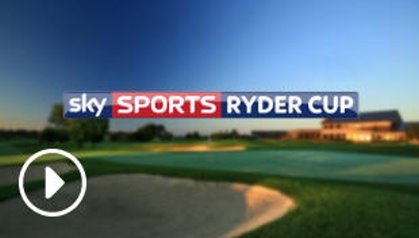 With Europe set to go head to head with America in the battle for The Ryder Cup, Sky Sports will bring 240 hours of coverage on a dedicated channel bringing viewers closer to one of the biggest events in sport.

Sky Sports Mix – the new channel available to all Sky TV customers – will broadcast live coverage of the opening ceremony as well as a selection of support programming including a new documentary on European captain Darren Clarke and the Ryder Cup Breakfast show.

Sky Sports Head of Golf Jason Wessely said: “The Ryder Cup stands alongside the biggest sporting events in the world and it is only right that we have a channel on Sky Sports for our viewers to soak in the excitement it creates. By offering fans ten days of Ryder Cup programming we hope to capture all of the history, passion and drama from what should be a boisterous American crowd and a fantastic competition.”

The tournament between the USA and Europe tees off on Friday 30 September at Hazeltine National Golf Club in Minnesota, USA, with Europe chasing a seventh success in eight attempts.

Sky Sports’ award-winning Ryder Cup coverage will include commentary and analysis from former European captains Colin Montgomerie and Paul McGinley as well as American golf coach Butch Harmon who will have a number of his players competing for Team USA. 2002 USPGA champion Rich Beem will also be on hand to offer his thoughts on Hazeltine, the course on which he won his maiden Major title.

Sky Sports Ryder Cup will appear on channel 404 with extensive coverage also available on all Sky Sports platforms. Fans can also watch the action live with a NOW TV sports week pass for £10.99.

The Ryder Cup caps Sky Sports’ biggest ever year of golf which has seen coverage of all four Majors as well as live PGA and European Tour golf every week to date. There is even more great golf for fans to look forward to at the end of 2016 with the British Masters Supported By Sky Sports and the finale of the European Tour’s Race to Dubai.