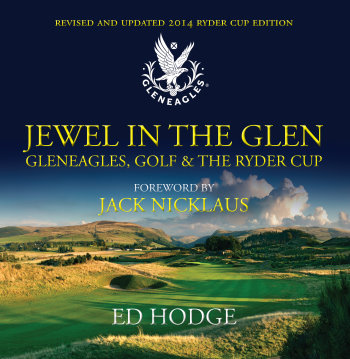 In 2014 The Ryder Cup returned to the place where it all began – Gleneagles. Europe were the clear winners and this brand new edition of the hugely successful Jewel in the Glen is fully updated with a new chapter on The Ryder Cup 2014.

From the USA v GB match in 1921 that sparked a rivalry for the ages, all the way to the latest instalment of an international sporting phenomenon in the 90th year of the iconic hotel, Ed Hodge tells the intertwining stories of the Ryder Cup and of golf at Gleneagles.

With a foreword by Jack Nicklaus, the greatest golfer of all time and the designer of the PGA Centenary Course at Gleneagles, as well as a fully updated hole-by-hole guide to the course by Ryder Cup legend Colin Montgomerie, Jewel in the Glen paints a unique portrait of Gleneagles, Scottish golf and the history of the Ryder Cup.

What’s more, an array of national and international celebrities, from Gary Player, Lee Trevino, Tom Watson, Paul McGinley, Sam Torrance, Sandy Lyle, Bernard Gallacher and Peter Alliss to Andy Murray, Kenny Dalglish, Stephen Hendry, Gavin Hastings and Sir Jackie Stewart, reveal what Gleneagles and the Ryder Cup means to them while examining the impact that the tournament has had on the local community and the wider Scottish society, culture and economy

Ed Hodge grew up in Perthshire, is a former Gleneagles caddy and employee and has enjoyed a writing relationship with the five-star resort for a number of years. A University of St Andrews modern history graduate with 11 years previous experience as a sports writer in Scotland, Ed is now PR & Media Executive for the Scottish Golf Union. Jewel in the Glen is his first book.