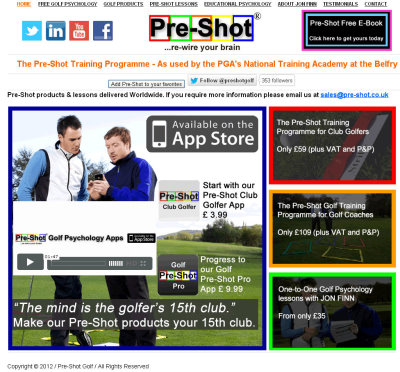 A new iPhone app designed by a Leeds Metropolitan University PhD student has been launched which teaches golfers of all standards to perform under pressure like World Number 1 Golfer, and winner of the 2012 BMW Championship, Rory McIlroy.

McIlroy continues to dominate world golf with his fantastic ability to play great golf under pressure.

He has been on a steep learning curve since his dramatic collapse in his final round at the Masters in 2011. On that day, Rory teed up his ball on the first tee box with a four shot lead over the rest of the field. He reported that as he reached the top of his backswing he said to himself, inside his own head, ‘Ooh, don’t go left’. Normally he would simply have a picture of the target in his mind, but on this occasion, self-doubt got the better of him.

A psychological meltdown followed, with a triple-bogey on the 10th, three putts on the 11th, and four putts on the 12th. McIlroy walked off the 18th green at the Augusta National with his name placed joint-15th on the leader board.

As a multiple major champion at the age of 23, Rory’s post-2011 Masters success has shown that golfers can learn how to control the way that they think when under pressure on the golf course.

As Jack Nicklaus says, “a good golf shot is 10% swing, 40% setup and 50% mental”. Therefore learning how to manage the mental aspects of golf is a must for anyone who wants to fulfil their golfing potential. Nicklaus explains his mental routine, which helped him to win 18 major championships, as going to the movies in his head. Whilst there he sees the shot he wants to play, sees himself hitting his ball to the desired location, all whilst talking himself through the shot.

Now the second in a series of iPhone apps – offering golfers a new way to train these mental aspects of their game – has just been launched. This allows golfers to learn how to think like Jack Nicklaus and Rory McIlroy on the golf course.

The Pre-Shot Training Programme is thought to be the only product of its kind and has been given the seal of approval by leading PGA coaches. The second app to be based on this system – Pre-Shot Club Golfer – is designed for weekend golfers. It is available to download via the Apple iTunes store for £4.99.

It is effectively a golf psychology coach in your pocket and has been created by Jon Finn, who is also a golf psychology consultant to the Professional Golfer’s Association’sNationalTrainingAcademyat The Belfry. He used his knowledge and experience as a hands-on coach to develop the new-look system which trains players how to think before, during and after they hit a golf shot.

The app is based on Finn’s unique method of visualisation and mental rehearsal which he has pioneered with players of all levels. It works by making key aspects of sports psychology tangible so that they can be easily and repeatedly practiced.

Significantly the Pre-Shot Programme has a generic framework which can be matched with any player’s personal preferences, making it suitable for all types and standards of golfer from weekend amateur to tour professional.

Finn has worked with golfers and golf coaches to transform his system into a series of apps which harnesses the iPhone’s capability to use proven psychological tools like video and still images to make the training even more effective. Golfers should start with the new Pre-Shot Club Golfer App, and then progress to the Golf Pre-Shot Pro App (the first Pre-Shot app launched in May).

“The pre-shot training system is a powerful psychological training tool”, commented Finn. “It makes golfers think effectively when they’re on the golf course and helps them manage their confidence, concentration and deal with pressure. As we saw at The Open, pressure can have a big impact on the way that players think. If Adam Scott had been better able to control his thoughts would he have won The Open? Personally, from my experience of high performance sport and psychology, I think he would. Further if he had been using our Pre-Shot process, or something similar, it would have definitely helped him to keep concentrating on useful thoughts.

“More and more of the coaches that I work with are telling me that their players are struggling to play their best golf in medal competitions, they simply cannot handle the pressure. Because of this the number of people who are playing in monthly medals are dropping; people are rapidly losing their confidence in this format, and are far more comfortable playing match-play formats of the game.”