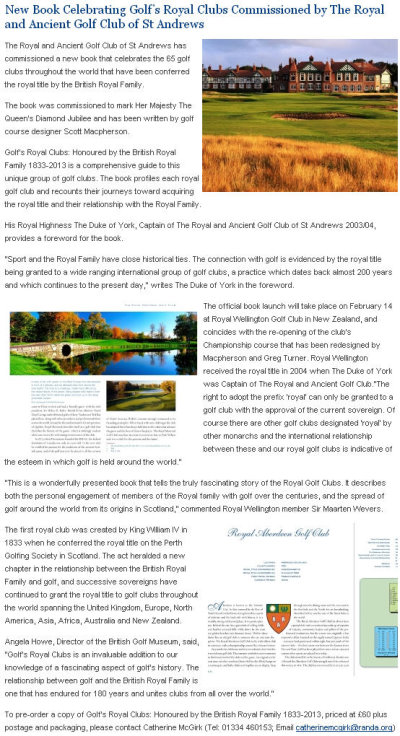 The Royal and Ancient Golf Club of St Andrews has commissioned a new book that celebrates the 65 golf clubs throughout the world that have been conferred the royal title by the British Royal Family.

The book was commissioned to mark Her Majesty The Queen’s Diamond Jubilee and has been written by golf course architect Scott Macpherson.

Golf’s Royal Clubs: Honoured by the British Royal Family 1833-2013 is a comprehensive guide to this unique group of golf clubs. The book profiles each royal golf club and recounts their journeys towards acquiring the royal title and their relationship with the Royal Family.

The Duke of York, Captain of The Royal and Ancient Golf Club of St Andrews 2003/04, provides a foreword for the book.

“Sport and the Royal Family have close historical ties. The connection with golf is evidenced by the royal title being granted to a wide ranging international group of golf clubs, a practice which dates back almost 200 years and which continues to the present day,” writes His Royal Highness in the foreword.

“The right to adopt the prefix ‘royal’ can only be granted to a golf club with the approval of the current sovereign. Of course there are other golf clubs designated ‘royal’ by other monarchs and the international relationship between these and our royal golf clubs is indicative of the esteem in which golf is held around the world.”

The official book launch will take place tomorrow (14 February) at Royal Wellington Golf Club in New Zealand, and coincides with the re-opening of the club’s Championship course that has been redesigned by Macpherson and former European Tour player Greg Turner. Royal Wellington received the royal title in 2004 when The Duke of York was Captain of The Royal and Ancient Golf Club.

“This is a wonderfully presented book that tells the truly fascinating story of the Royal Golf Clubs. It describes both the personal engagement of members of the Royal family with golf over the centuries, and the spread of golf around the world from its origins in Scotland,” commented Royal Wellington member Sir Maarten Wevers.

The first royal club was created by King William IV in 1833 when he conferred the royal title on the Perth Golfing Society in Scotland. The act heralded a new chapter in the relationship between the British Royal Family and golf, and successive sovereigns have continued to grant the royal title to golf clubs throughout the world spanning the United Kingdom, Europe, North America, Asia, Africa, Australia and New Zealand.

Angela Howe, Director of the British Golf Museum, said, “Golf’s Royal Clubs is an invaluable addition to our knowledge of a fascinating aspect of golf’s history.  The relationship between golf and the British Royal Family is one that has endured for 180 years and unites clubs from all over the world.”

The Royal and Ancient Golf Club of St Andrews www.RandA.org