NBC Sports Group to Broadcast The Open starting in 2017 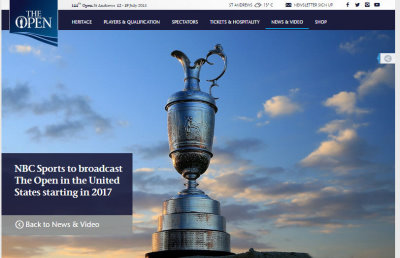 The R&A has announced that NBC Sports Group will become its media partner in the United States for a twelve year term from 2017 – 2028 inclusive.

The R&A has announced that NBC Sports Group will become its media partner in the United States for a twelve year term from 2017 – 2028 inclusive.

The agreement includes coverage across all media of The Open, The Senior Open, Walker Cup and The Amateur Championship and will feature coverage on NBC and Golf Channel in English and NBC Universo in Spanish.

R&A Chief Executive, Peter Dawson, said: “We are delighted to announce that from 2017, The Open will be broadcast by NBC Sports Group. They have unparalleled experience in golf and have demonstrated a genuine desire to showcase and promote The Open and The R&A’s elite championships through their extensive range of channels and digital platforms.

“The United States is home to millions of fans of The Open and we know that through NBC Sports Group, they will enjoy world class coverage of the Championship.

Mark Lazarus, Chairman of NBC Sports Group, said: “The R&A is synonymous with the traditions and history of golf, and The Open is golf’s original championship. NBC Sports is proud to present The Open Championship, and to work with The R&A on their initiatives to grow the game around the globe.

“This partnership will allow NBC Sports, Golf Channel and NBC Universo to serve the legions of sports fans in the U.S. with complete coverage that reflects the prestige of The R&A’s championships.”

The 146th  Open will be played at Royal Birkdale in 2017, with golf’s oldest and most international championship being hosted at Carnoustie for its 147th playing in 2018.

This year’s Open Championship will be played in a few weeks’ time at St Andrews with ESPN, The Open’s broadcast partner of the last five years, providing the coverage. ESPN will also broadcast The Open in 2016 at Royal Troon.

Dawson said: “We have enjoyed, and continue to enjoy, an excellent relationship with ESPN. They have raised the bar in terms of covering major championship golf and their commitment to telling The Open’s story and delivering the most compelling coverage of The Open Championship has been outstanding.”

Golf GameBook has partnered with British Junior Golf Tour (BJGT) for the next three years in an effort to provide a unified and holistic tournament experience for junior golfers in the UK and beyond.