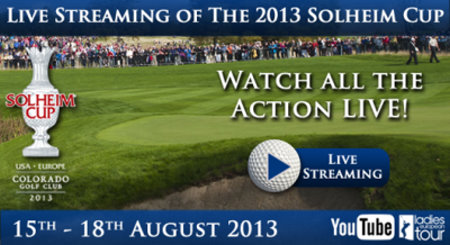 In some countries the LET will provide live coverage of The Solheim Cup matches at Colorado Golf Club in on its official YouTube channel from 15-18 August, plus additional content including news, special features and highlights (for detailed list of countries where the live stream is available, please follow the link: http://www.ladieseuropeantour.com/content.php?id=67954.

The announcement comes as broadcasters prepare to air more than 31 hours of live coverage from The 2013 Solheim Cup in the United States. The extensive live coverage will include the opening ceremony and will follow all the action from the first shot to the last putt as Europe’s women defend The Cup.

“We are delighted to be able to offer free live video streaming of the premier event in women’s golf,” said Ladies European Tour CEO Ivan Khodabakhsh. “Anyone that enjoys the thrill and drama of live sport can now watch The Solheim Cup in those countries where The Solheim Cup cannot be viewed on television. It is hugely important to the Ladies European Tour to bring the excitement of women’s golf to a wide and diverse audience and we are proud to be able to deliver a live streaming service on YouTube for the first time this year.”

The live coverage of The 2013 Solheim Cup will be produced by Sky Sports with Laura Davies – a veteran of all 12 Solheim Cups and the event’s leading points’ scorer – and three-time United States team-member Christina Kim – the expert studio guests.

Additional news, behind-the-scenes features and insightful interviews produced by Ladies European Tour television production partner, UCOM will also be available to watch throughout the week of the tournament. The LET YouTube player will also be available on partner sites such as on the SAP and Allianz golf website (http://www.facebook.com/AllianzGolf) and on Golf.de