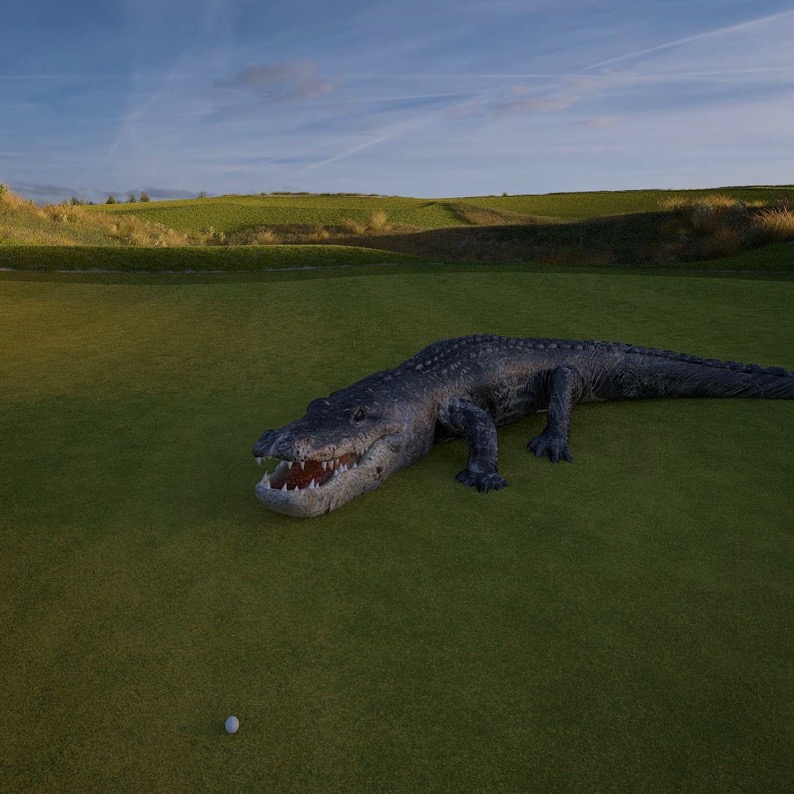 People running away from a booth at a major industry show is not normally seen as a recommendation of one’s work – but that’s exactly what it was for golf course animation specialist Harris Kalinka at the recent Golf Industry Show (GIS) in Orlando.

The UK and Latvia-based company was showcasing its outstanding work with golf course architects in the world of virtual reality (VR). And, for one woman, the sight of a life-size alligator snapping at her feet, on the VR visualisation of a course, proved just too realistic as she tried to run from the stand in fright.

Harris Kalinka director Andrew Harris explained: “For a bit of fun we included a large alligator on one of the greens, standing right at the feet of the viewer – after all we were in Florida. This proved to be a bit of a shock for some. We had a couple of people scream out loud. This particular lady tried to run away and we had to stop her from pulling our equipment off the table. And one guy tried to kick the alligator but instead he caught my business partner Juris who was standing close by.”

For all the light-heartedness that the VR giant reptile generated, there was serious business to be discussed and Harris believes it will prove a hugely worthwhile trip as, alligator aside, there was much to showcase.

He added: “For us it was one of the most exciting shows in recent years because we were demo-ing the Oculus for the first time and we were anxious to know what the reaction would be. We’ve spent months working on golf course projects in virtual reality (VR) but we had never before shown them to such a large audience.

“The VR proved to be a big attraction and after only a few people had used it word spread and we had people queuing to give it a go and stand on a golf course in virtual reality. We showed a selection of our latest projects and took people to Vietnam, Mexico, China, the UK, Indonesia and the USA.

“For golf course architects it was particularly interesting for them to see the technology, and discuss the opportunities and potential application. We had the likes of Ernie Els Design, Arnold Palmer Design, Gary Player Design, Beau Welling, Robert Trent Jones II and Tiger Woods Design come over and chat about it.”

Arguably the biggest compliment paid – but increasingly not an unusual accolade – was the number of people who mistook Harris Kalinka’s animations for drone footage as they could not believe what they were seeing was computer generated.

Among those who were mightily impressed was Golf Digest‘s contributing editor, Geoff Shackelford, who, in his role as presenter with the Golf Channel, stopped by to experience the VR and interviewed Harris for the Morning Drive programme.

Harris added: “We were delighted with Geoff’s reaction to the VR. Among other things, we discussed its possible application for hole renovations and he was very impressed with the level of detail we can achieve.

“The last time we attended GIS we focused on new-build courses, but, recently, we have been working with more and more existing courses to show their renovations and redesigns.

“Consequently, we had a lot of very productive conversations with course architects and clubs who are currently involved in such projects, discussing how our CGIs, animations and now VR, can help them communicate the changes to the existing members and help attract new members.”

Harris Kalinka’s visualisations have been used successfully to attract members, raise investment, sell off-plan, develop a design or to present an idea.

Final preparations are underway to mark the bicentenary of Tom Morris in his birthplace, St Andrews, Scotland.

One of the most stunning golf venues in the world, Torrey Pines South Course in San Diego, California, will host the 121st edition of the US Open from 17–20 June. Rolex has been the Official Timekeeper at this Major championship since 1980.