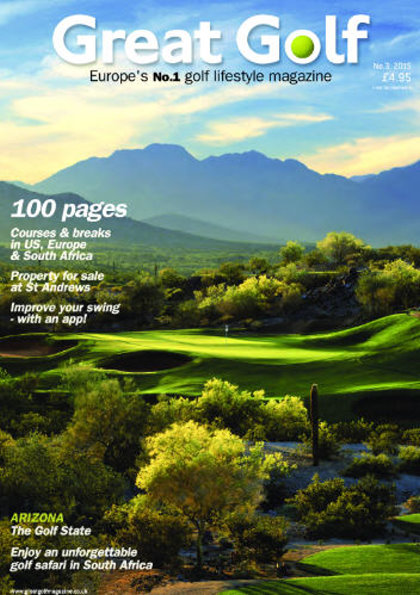 Great Golf, distributed free through Golf Clubs, Resorts and Travel Hubs throughout the UK, will celebrate its fifth birthday with an increase to bi-monthly frequency.

The magazine, which launched in 2011, is increasing frequency from quarterly to bi-monthly after ‘a record year’ in 2014. Advertising revenue was up by 20%. The first bi-monthly issue will be February 2016.

Mike Stock, Managing Director of Great Golf Media says: “The magazine has really taken off during the past 18 months because readers and advertisers like the quality of our content. This is a luxury market and we have been careful to use high-quality content and great production values. Golf Clubs are ringing us all the time to request more copies because, as one told us last month: ‘Great Golf works because it is good enough to pay a lot of money for but it’s free’.

At a time when fewer people are buying magazines on the news-stand, Great Golf has come into its own. “Stock adds: “Hardly a week goes by without a major publisher wanting to buy us, so we must be getting something right. But Great Golf is staying independent and now we’re going bi-monthly in 2016.”

Colin Morrison, chairman of Great Golf Media, says: “Great Golf is riding the crest of a wave because it is a high-quality magazine with a guaranteed circulation to an audience and advertiser base which love us almost as much as they love golf.”

Great Golf has a circulation of 20,000 copies, distributed through Golf Clubs & Resorts, City financial institutions and the UK business class lounges of airlines including Virgin Atlantic and British Airways. It was launched in June 2011.

The magazine goes bi-monthly from January-February 2016 and will have an ABC audit in June for the first-half of 2016.