Golf Management Europe re-launches with an accent on Europe 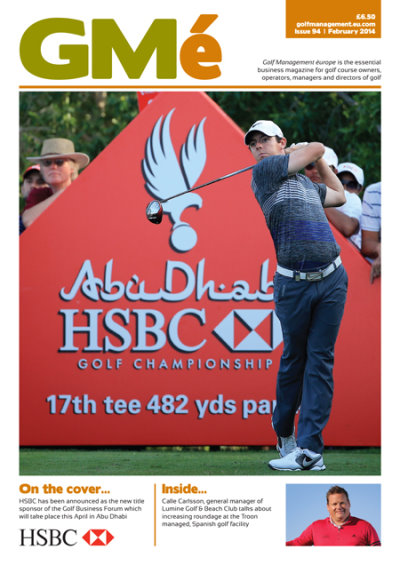 Golf Management Europe, the leading business-to-business magazine read by golf course owners, operators, developers and club management throughout Europe the Middle-East and Africa, has been re-launched this week following a six-month market research and re-branding exercise.

As part of the re-launch – which will see the title re-named GMé – a new website was also unveiled which has been designed from the ground up to fully complement the magazine. Commenting on the re-launch, publisher Michael Lenihan said: “A great deal of time and energy has gone into the re-design and re-launch, which will see the magazine grow not only in terms of pagination, but also in terms of its geographical coverage. Since Golf Management Europe was launched some 17 years ago, I have been astonished by the amount of owners and directors of golf who read the magazine from outside of Europe, which is why we have now decided to include the Asia Pacific region within our distribution area.

“We will of course remain true to our core values here in Europe, but as the golf industry appears to be slowly coming out of recession, we thought that now was the right time to expand our focus further afield to the emerging markets in the Far East.”

Despite continually increasing European distribution costs, Lenihan has pledged to continue distributing the printed version of GMé throughout Europe, whilst at the same time introducing a new, digital version which will be available for everyone to read online via issuu – the world’s fastest growing digital publishing platform. “As part of our market research, it was clear that the vast majority of readers still preferred the look and feel of a printed magazine rather than a digital equivalent, which is why I am committed to developing the printed version of GMé in the years ahead,” added Lenihan. “That said, I do appreciate that there is a place for both digital and print versions, which is why we have partnered with issuu, allowing readers the added convenience to view not only the current edition, but also our entire back catalogue online, completely free of charge.”

Readers and advertisers alike have also commented on the re-launch, with John Glendinning, general manager at Close House Hotel and Golf saying: “I depend on Golf Management Europe to keep me informed and up-to-date with all of the latest industry news and views from around Europe. For me, GMé is an invaluable read!”

Jacobsen president, David Withers added: “Over the years, Golf Management Europe has become the leading journal for quality information relating to the European golf sector. It provides succinct editorial and interesting features to our trading territory and is an essential read for those with more than a passing interest in European golf.”

The new-look February/March 2014 edition of GMé can be read, online at www.golfmanagement.eu.com