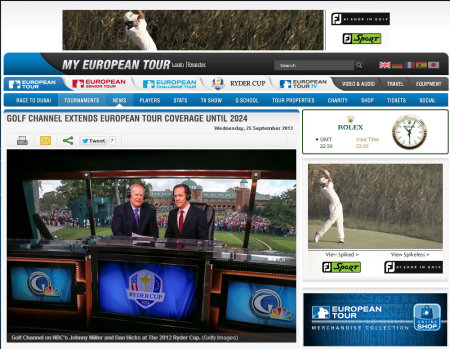 The extension to the existing seven-year arrangement will begin in 2015 and was announced on the eve of the Alfred Dunhill Links Championship, one of the most prestigious events on The Race to Dubai and one of the most popular European Tour tournaments with American audiences.

George O’Grady, Chief Executive of The European Tour, said: “We have had an exceptionally strong association with Golf Channel since its inception 19 years ago and this relationship was further highlighted earlier this year when Golf Channel on NBC broadcasted the Aberdeen Asset Management Scottish Open.

“We are therefore delighted to announce this ten-year extension to our agreement, which is further compelling evidence of the continued appeal of The European Tour, through our showcasing of the game and the immense talent being discovered in all of the countries where our tournaments take place.”

Mike McCarley, President of Golf Channel, said: “The European Tour features many of the world’s best golfers playing on spectacular courses across Europe, the Middle East and Asia, which is reflective of golf as a global game. The European Tour’s regular morning timeslot has kicked off Golf Channel’s tournament coverage days since the network’s launch and this extension further solidifies our strong partnership, which now will span three decades with this new agreement.”

The new agreement further underlines The European Tour’s long-term relationship with Golf Channel, which dates back to the network’s launch in January 1995 with its first live golf coverage at the Dubai Desert Classic. The continued growth of this partnership has been marked by several major milestones, including Golf Channel on NBC’s broadcast of the Aberdeen Asset Management Scottish Open in July, which was the first regular European Tour event to be aired live on network television in America.

Since Golf Channel joined the NBC Sports Group in 2011, The European Tour has seen nearly a 60 per cent increase in viewership. And this season is on pace to be The European Tour’s most-watched year ever in the United States.

Under the terms of the new agreement, The European Tour and Golf Channel will continue to work closely on the commercial delivery of events, whilst also collaborating to enhance the overall production of European Tour events. In addition, the agreement encompasses rights to Golf Channel networks in Canada and Japan.