ESPN The Magazine has featured the legendary golfer Gary Player in the line-up of athletes for their fifth annual ‘Body Issue’. At age 77, Player, who is widely regarded as a pioneer in sports fitness and as Golf’s ‘Global Ambassador’, will be the oldest athlete in the feature’s five-year history.

The Body Issue celebrates the best bodies across the world of sports and was released on 12th July.

“Fitness has been a passion, a way of life and one of the keys to my success in golf,” said Player, who has won 165 golf championships worldwide, including nine Majors. “When ESPN approached me with this unique opportunity to show off my body that has served me so well over my 60 year career, I agreed in the hopes that it would be inspiration for others to live well.” The Black Knight went on to say he was “honoured to do so.” 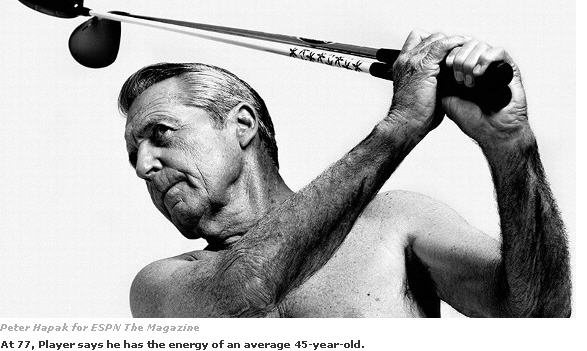 Also featured is Ladies European Tour Golfer Carly Booth who said: “This will probably be the first time my father finds out about my tattoos!”

“Being included in this magazine along with some of today’s young superstar athletes has been an enjoyable experience,” said Player. “I hope my appearance demonstrates the importance and value of maintaining your body and making a lifelong commitment to staying fit and healthy.”