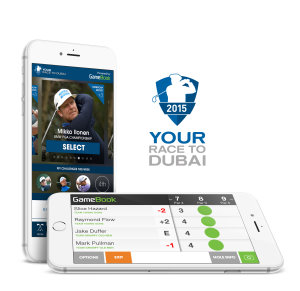 Golf fans around the globe will soon be able to take on stars of The European Tour in a new match play challenge powered by live-scoring app Golf GameBook.

The groundbreaking ‘Your Race to Dubai’ game enables amateur golfers to use scores recorded on the free Golf GameBook iPhone app to challenge top tournament professionals competing in European Tour events in the same week.

The exciting new concept, which will be launched in time for the BMW PGA Championship at Wentworth 21-24 May puts fans in the unique position of going head-to-head with their favourite players, including Rory McIlroy, Justin Rose and Henrik Stenson, during live tournament play.

From the comfort of their own home, fans watching the tournament on TV or online, and simultaneously using the Golf GameBook app, can see their match play round unfold hole by hole, sharing comments and score updates on social media.

Each result counts towards a global ‘Your Race to Dubai’ ranking, ending at the DP World Tour Championship at Jumeirah Golf Estates, 19-22 November.

Tim Hunt, Marketing Communications Director of The European Tour, said: “Many of our European Tour professionals are already familiar with Golf GameBook and have used the app for live scoring, sharing pictures and comments during tournament Pro-Ams. It has proved popular and so developing this concept into a global ‘Your Race to Dubai’ weekly game, available in 26 countries, is a great way for fans to engage with the Race to Dubai and inspire them to play their best golf.”

The scores of professionals will be updated automatically and instantly on the Golf GameBook app, so fans watching tournament rounds in real time will know whether they are up or down in their match play. The app has been specially configured to automatically adjust for amateur handicaps as well as the different courses being played by fans and professionals.

Kalle Vainola, co-Founder of GameBook, said: “Your Race to Dubai offers golfers a unique experience and brings a whole new meaning to their rounds. For most golfers, the thought of playing with the likes of Rory, Justin or Henrik is a dream; but with our match play all golfers, whether they are in Europe, Asia or the Middle East, can enjoy a European Tour experience and the opportunity to go head-to-head with some of the best professional golfers in the world.”

How Your Race to Dubai works:

Developed by PGA professionals who themselves have previously played on The European Tour and Challenge Tour, Golf GameBook is now the fastest growing golf community in the world with more than 850,000 downloads. It was also recently shortlisted for both ‘Best Use of Technology by a Sponsor’ and ‘Best Sports App’ at the Sports Technology Awards 2015.

With nearly 2.5 million rounds of golf recorded so far, Golf GameBook is the first and only free live scoring app that offers social interaction between players and friends on the course.

Your Race to Dubai www.yourracetodubai.com