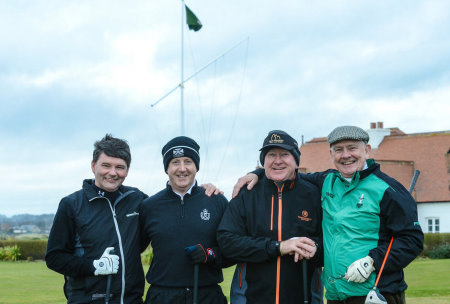 This year Carr Golf took up the sponsorship of the Irish Golf Writers Awards which were held at Portmarnock Golf Club. Previous sponsors include AIB Bank and mobile phone operator O2. The awards were attended by 140 invited guests from the golf industry including the GUI, ILGU, PGA and a number of secretary managers from Ireland and Scotland.

Graeme McDowell was awarded the PGA Professional of the year and his award was accepted by Conor Ridge of his management company Horizon Sports. Graeme send a televised message from TRUMP Doral where he was playing on the revamped Blue Monster.

Paul McGinley was the recipient of the Distinguished Services to golf award. Paul, who had announced his vice captains Sam Torrance and Des Smyth on the day, was also awarded honorary membership of Portmarnock Golf Club on the night.   Also in attendance were Padraig Harrington and his wife Caroline along with Ryder Cup Vice-Captain Des Smyth.  The evening was closed off with a televised Q&A session with Roddy Carr quizzing Paul McGinley and Padraig Harrington on all things golf; the Walker Cup in Portmarnock Golf Club, their World Cup partnership, the pressure of the Ryder Cup. Roddy asked Padraig if he had two words for Paul, what would they be, to which Padraig answered “Pick Me”!

Representing Carr Golf, Marty Carr said how delighted the group were to be partnering with the Golf Writers, especially given the company was celebrating 25 years in business in 2014. Marty said he was hopeful that this would be a long term association and that Portmarnock Golf Club was the perfect venue, given his Father JB had lived in the clubhouse for the early part of his life. The entire Carr Clan were on hand to celebrate with the winners.

Here is the link to the online gallery http://thephotoproject.smugmug.com/Carr-Golf/Irish-Golf-Writers-Awards/