Four-time Major Champion Ernie Els and Ryder Cup heroes Sergio Garcia and Ian Poulter are the latest global golfing superstars to be confirmed for next month’s BMW PGA Championship, with a high profile introduction on the London landscape.

The trio of world class golfers will become highly visible faces to around 3.5 million people living, working or visiting London at strategic locations around the capital as their familiar images are featured on seven digital billboards and numerous other high-impact sites in and around the Capital. 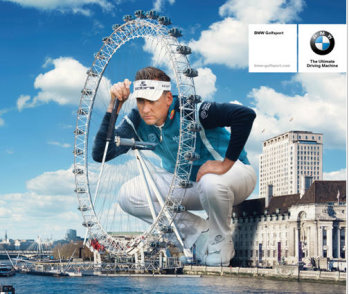 The familiar images of Els, Garcia and Poulter will be linked to iconic capital landmarks such as Big Ben, St. Paul’s Cathedral and the London Eye as part of the second phase of the ‘Monumental’ campaign, involving The European Tour and outdoor advertising company, Clear Channel UK, who recently became an Official Media Partner of the Tour’s flagship event.

Last month, the images of US Open Champion Justin Rose, Race to Dubai winner Henrik Stenson and former World Number One Westwood launched the campaign as part of a series featuring modern buildings dominating the London skyline on 96-sheet sites around the capital. Adverts also ran on numerous 48-sheet billboards and 6-sheet Adshel bus stop panels around the city, numbering 110 in total.

Clear Channel has a national network of 60,000 high-impact advertising sites nationwide, including on the key arterial routes in and around the Capital, and will deliver visibility and brand awareness of the BMW PGA Championship 2014 on an unprecedented scale. 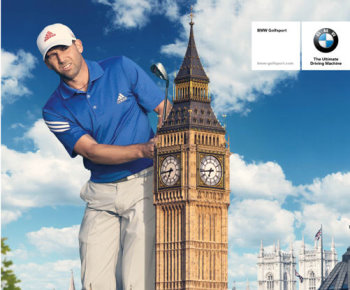 Over an intensive three-month campaign promoting the BMW PGA Championship, Clear Channel’s sites will have the potential to reach over three million people at strategic, high target locations such as the M4, A4, M3, A3 and M40 and A40.

Using some of the most iconic sites in UK outdoor advertising, including the M4 Tower, in addition to Clear Channel’s unique LD6 digital network in central London, the superstars of the game will be extremely visible to a massive audience in the build-up to the BMW PGA Championship 2014.

It is the first time that The European Tour and BMW have engaged in such a high-profile outdoor advertising campaign, and all of the leading lights – including defending champion Matteo Manassero of Italy – are thrilled to be part of the London landscape, just a short distance from the iconic West Course at Wentworth Club.

Els, a long-time resident of Wentworth Estate, can be seen swinging next to St. Paul’s. He said: “The BMW PGA Championship has always been high on my list of priorities, as the flagship event of The European Tour, and this campaign, combing golf with some of London’s most iconic landmarks at many of the city’s most prominent locations, adds a fresh, new dimension to the event.”

Garcia, who can be seen alongside Big Ben, commented: “It’s great that The European Tour and BMW have got together to create this fantastic campaign. It’s pretty cool to be associated with one of London’s most famous buildings and it can only be good for golf to be featured across London.”

Poulter, who is crouched beside the London Eye, added: “It’s brilliant that millions of Londoners will be able to identify more closely with golf through these prominent poster sites around the city. The BMW PGA Championship is a quality tournament and it will be great if this campaign encourages a new audience to come along to Wentworth.”