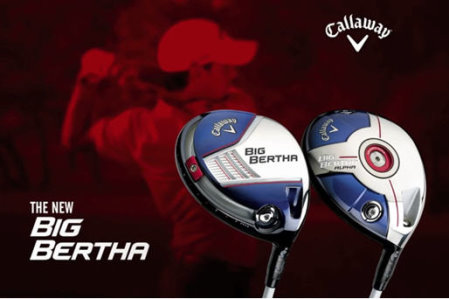 Commencing today and continuing for two months, more than 1,500 ‘idents’ featuring the Big Bertha and Big Bertha Alpha Drivers will either precede or follow magazine programmes, highlights and live coverage of golf being aired by the broadcaster in this period.

Big Bertha Alpha, already a winner on The European Tour and PGA TOUR, is now set to become a star of the small screen in the hands of over 20 Callaway Staff Professionals and Callaway Staff Ambassadors.

And in a first for both Callaway and Sky Sports, Callaway fans will have the opportunity, via a social media campaign launching later next week, to star in the 5 and 15 second idents by uploading photos or videos of themselves swinging either the new Big Bertha and Big Bertha Alpha Drivers – with the lucky winners appearing as ‘stars’ in the idents during the last few weeks of the sponsorship campaign.

Neil Howie, President and Managing Director of Callaway EMEA, said: “Big Bertha’s back and what better way of heralding its launch by partnering with the UK’s biggest golf broadcaster.

“Callaway isn’t just about Tour Staff though, and we are equally excited to extend the campaign to members of the golfing public, giving them the chance to star in our idents.”