SNAG is a Beacon of Success 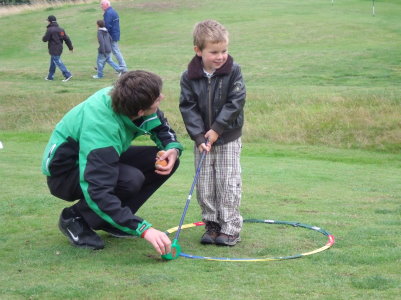 Starting New at Golf (SNAG) was a hit with the community in Harrow during the summer holidays. Events were held to introduce young and old from all cultural backgrounds to the sport of Golf by Ian Goosey of IG Golf Performance.

Ian is the owner of IG Golf Performance and specialises in Golf Coaching, especially Junior Development, and has been utilising SNAG in his coaching programme to increase awareness of the sport through fun activities.

The Beacon Centre in Harrow was the first to benefit from SNAG during the holidays, when it was included in the Fun Day held on August 18th. Participants aged from 4 years upwards, most of who had never held a golf club in their lives before. Interest was such that enquiries have already been made at the centre, which is managed by Homegroup on behalf of Harrow Council’, as to whether SNAG Golf can be introduced as a regular event.

Roxeth Green Church followed hot on the heels of the Beacon Centre when it included SNAG in its Children’s Week activities at the end of August. Children and parents took part together in the SNAG experience and such was the level of enjoyment that Church leaders are already looking into holding a further event.

Ian was extremely pleased with the success of both events and was quick to thank Frank Harrington of International Golf Development, who supply SNAG in the UK for all his help at the events.