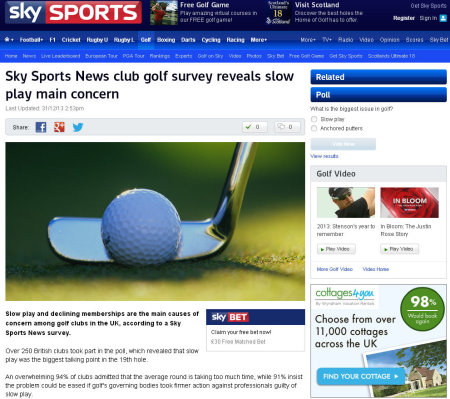 Slow play and declining memberships are the main causes of concern among golf clubs in the UK, according to a Sky Sports News survey.

Over 250 British clubs took part in the poll, which revealed that slow play was the biggest talking point in the 19th hole.

An overwhelming 94% of clubs admitted that the average round is taking too much time, while 91% insist the problem could be eased if golf’s governing bodies took firmer action against professionals guilty of slow play.

Five-hour rounds are common on the European and PGA Tours these days, and club golfers believe heavier and more frequent punishment for the pros would speed up the pace of play around the local municipals.

After a year in which a ban on anchored putting was agreed by the R&A and the PGA Tour, only 8% of clubs said this was a bigger cause of concern than slow play.

“A lot of the juniors who are watching golf are picking up bad habits after seeing us taking our time. It’s down to the intricacies of the rules or people not being ready when it’s their turn … it’s a reasonably big problem in the game.” says Luke Donald

Another worrying trend is the decline in club membership, with 70% of clubs reporting that subscriptions have decreased over the last five years.

Only 1% said their dominant membership group was in the 31-40 bracket, and youth membership has also taken an alarming dive despite 76% of clubs having a youth scheme in place.

Female membership has been hit even harder, with a 75% drop according to the survey.

Despite the declining numbers, 52% of clubs believe they are getting enough assistance from golf’s ruling bodies, although non-major tournaments appear to have little impact on club business.

The Open Championship (21%) and the Masters (29%) are known to have a “significant” effect on revenue, but regular European Tour events staged in the UK rarely boost club coffers.

The other main cost to British golf clubs is, of course, the weather. Adverse conditions have cost 37% of clubs more the 31 days of business over the last three years, although 22% have lost less than a fortnight.