Over 70,000 Get into Golf during Summer of Sport 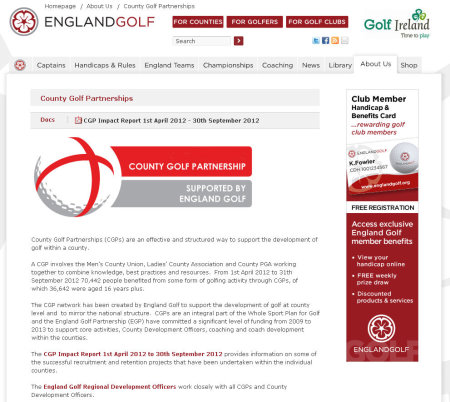 England’s network of County Golf Partnerships (CGPs) enjoyed a hugely successful summer of sport and introduced over 70,000 people to golf in the six months to the end of September.

That’s almost double the number who tried the sport in the same period last year.

The number of adults (aged 16-plus) involved in once-a-week golf activity also increased.  In addition, 23 Partnerships reported a total of 1381 new golf club memberships during the six months.

The increases were achieved despite the challenge of the wettest summer in 100 years and the competing attractions of events such as the Queen’s Diamond Jubilee celebrations and the Olympics.

The successes, detailed in the latest CGP Impact Report, were underpinned by:

Richard Flint, England Golf’s Development Manager, commented: “These are fantastic results for the CGPs and for golf clubs. It is clear that CGPs are benefiting from working more closely together and sharing examples of best practice.

“These successes are also good news for golf clubs and the PGA professionals who work with the Partnerships. They benefit from spending on coaching sessions, refreshments, green fees and memberships.”

The CGP network supports grass roots golf at county level and is an integral part of the England Golf Partnership’s (EGP) Whole Sport Plan for golf.  All CGPs offer activities, such as taster sessions and coaching programmes with PGA professionals, to attract beginners and returners to the game, particularly those aged 16 and over. Highlights of CGP activities over the six months included:

Overall, activities by the CGP network from April to September 2012 resulted in:

The latest CGP Impact Report can be downloaded at www.englandgolf.org/cgps