“Open for All” Fan Programming for Historic 2014 U.S. Open Championships 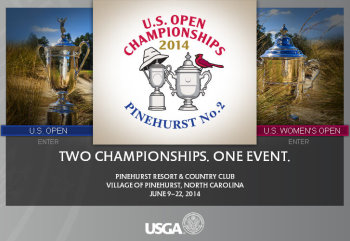 As part of its commitment to make golf more accessible and enjoyable, the United States Golf Association (USGA) has announced “Open For All”, a series of beyond-the-gates experiential initiatives surrounding this year’s historic back-to-back U.S. Open Championships. The fun and interactive events have been designed to attract new audiences and celebrate golf fans’ connection to the game.

“Anyone who has ever attended a U.S. Open knows how special an experience it is,” said Daniel B. Burton, USGA vice president and Championship Committee chairman. “’Open for All’ is our anthemic opportunity to bring the excitement of these championships beyond the gates, and deeper into the community. Our championships are defined by the people who volunteer, view and participate and we’re excited to create opportunities for these important audiences to grow in their connection to a game we all love, and open up golf and the USGA to new audiences.”

The U.S. Open: Drive to Pinehurst

In late May, the USGA’s beyond-the-gates programming will kick off with The U.S. Open: Drive to Pinehurst video series, in partnership with Lexus. The three segments will chronicle the captivating stories of three North Carolina-based amateur golfers and their unique and special connection to this year’s Championship. Told through the voice of the individual golfer, each video will share their affinity for the game and their personal golf journey.

Filmed in Pinehurst, Raleigh and Greensboro, the vignettes will be featured on usopen.com and promoted actively throughout online social channels including Facebook, Google and YouTube leading up to commencement of the championship in early June.

2014 marks the first year that the USGA will begin a tradition of hosting its annual Bob Jones Award ceremony on-site at the U.S. Open Championship.

The Bob Jones Award is the USGA’s highest honor and annually recognizes an individual who personifies the values of its namesake: sportsmanship, integrity and respect for the game.

On Tuesday, June 10th, U.S. Open Championship ticketholders are encouraged to attend the on-site ceremony and join the USGA, friends and family as they celebrate the life and career of 2014 Bob Jones Award winner Payne Stewart. Spectators will be able to view the ceremony live at 5pm EDT from the Lawn Area near the Pinehurst clubhouse. For those not attending the Championships in Pinehurst, the Award Ceremony will be streamed live in its entirety on www.usga.org

Separately, a public screening of a new USGA Film on Payne Stewart’s 1999 U.S. Open victory will run later in the evening in the Village of Pinehurst, beginning at 8pm EDT. The new film entitled, The 1999 U.S. Open: One Moment in Time, was produced through a true collaboration between the USGAMuseum and Ross Greenburg, a 51-time Sports Emmy Award winner.

Building on the success of last year’s family-friendly events in Philadelphia’s CenterCity district, the USGA is elevating and expanding its popular “U.S. Open Experience” in 2014.

Conveniently located in TuftsPark in the center of the Village of Pinehurst, the “U.S. Open Experience” will feature two weeks of special events with free admission to the public.

Festivities will begin at the conclusion of daily practice or championship play, and will run from 10th June until 22nd June 22. A complete and up-to-date schedule of events will be available at www.usopen.com/usopenexperience

“The USGA has an extraordinary partner in the Village of Pinehurst and their special events committee,” said Sarah Hirshland, USGA senior managing director of business affairs. “Together we are working to fulfil our shared vision for the activities surrounding these historic Championships. Their welcoming spirit and openness will leave U.S. Open fans with an outstanding impression of the community and a desire to return.”