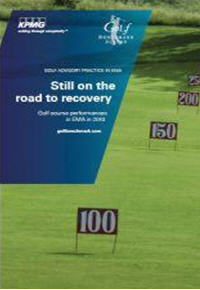 Less than half (49%) of golf courses in Europe, the Middle East and Africa were profitable in 2010, a new KPMG Golf Benchmark Survey reveals.

The report – free to download from www.golfbusinesscommunity.com – also shows that rounds and revenues across the region are down amid widespread cost-cutting and price adjustments at clubs.

However, the survey of over 350 golf courses also reveals that the business performance of golf courses varies from region to region, with the Middle East performing strongly despite continued fallout from the economic downturn.

Among the most notable findings in the annual survey are:

Among the best performing regions were Central Europe and Middle East & North Africa.

Germany’s broader economic strength is reflected in the positive results from courses in Central Europe, while Middle East facilities retain a high level of performance highlighted in previous Golf Benchmark Surveys. Development of new golf courses in this region, aligned to resorts and residential communities, continues apace, although the long-term impact of political events in North Africa is not yet known.

Andrea Sartori, head of KPMG’s Golf Advisory Practice, acknowledged that golf courses have been “active” in their efforts to boost profits.

“For some this will have improved their performance or mitigated the ongoing effects of the economic downturn,” he said, but added: “However, it is clear from the number of loss-making golf facilities that market forces continue to impact on the performance of courses.”

“We are looking forward to addressing the hot topic of how golf course performances can be improved in these tough economic times with leading operators from around the world at our upcoming Golf Business Forum in Dubai in April.”

To download the performance report, free of charge, and for more golf business intelligence visit www.golfbusinesscommunity.com and look in the Golf Benchmark Survey section.