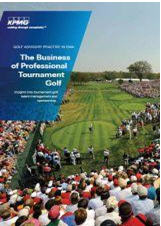 The specially commissioned report, free to download from www.golfbusinesscommunity.com , reveals that for the 32 tournament circuits analyzed in 2009 there were 671 professional golf tournaments in 57 different countries, with more than 6,000 players competing for total prize money of EUR 476 million.

Despite the economic downturn, professional tournament golf has proved relatively resilient, the report finds, with a strong potential to grow in the rapidly emerging markets of Asia (Y.E. Yang of South Korea became the first Asian winner of a men’s major championship in 2009) and South America, where golf will make its return to the Olympics in 2016 at Rio de Janeiro.

However, it is the established golfing territories – and Ryder Cup regions – of the United States of America and Europe that continue to lead the field. While the PGA Tour in America remains the richest tour with total prize money of EUR 196.4 million (USD 273 million) in 2009, the European Tour has enjoyed impressive growth over the past 20 years, increasing total prize money from EUR 14 million in 1989 to EUR 135 million in 2009, a compound annual growth rate (year-on-year) of 16%.

The report underlines golf’s reputation as one of the most lucrative professional sports in the world – 62 players on the PGA Tour each won prize money of more than EUR 1 million in 2009. It is estimated that professionals in the top 50 of the World Golf Rankings almost double their on-course prize money with off-course earnings, including sponsorship and endorsements.

For golf’s two biggest earners – Tiger Woods and Phil Mickelson – the proportion is estimated to be between 77% and 85%, with Tiger Woods earning a total of USD 90.5 million in 2009, according to Sports Illustrated, making him the highest-paid athlete in the world, followed by tennis star Roger Federer (USD 61.8 million) and Phil Mickelson (USD 61.7 million).

In an exclusive survey of talent managers and agents representing more than 200 players, Tiger Woods was voted the most marketable golfer of all time followed by Jack Nicklaus and Arnold Palmer (joint second), Greg Norman (fourth) and Gary Player (fifth).

For the most marketable players under the age of 25, agents across the globe picked European Ryder Cup player Rory McIlroy as the clear number one, followed by the USA’s Rickie Fowler, who is also playing in the Ryder Cup this week, plus Japan’s Ryo Ishikawa.

The survey also revealed that approximately two-thirds of agents felt that the economic downturn had significantly impacted upon the sponsorship income of their clients, while slightly over one-third of agents reported a similar negative impact on appearance fees.

However, talent managers were positive about the future, with 46% saying there would be growth in the sponsorship and endorsement market in the next three to five years. Once again, golf’s inclusion in the Olympics was seen as a positive factor, with 73% anticipating a significant impact on corporate sponsorship demand.

Among the reasons sponsorship of professional tournament golf has proved relatively resilient throughout the economic downturn, the report finds, is that many deals were struck before the economic crisis, with contracts of three to five years commonplace. Also, the typical demographics of golfers have continued to make the sport highly attractive to sponsors.

One recent trend is the emergence of public sector institutions and state-funded tourism destinations as sponsors of golf tournaments, realizing the value of golf tourism and the fact that golf tourists tend to spend more on their golf holidays than typical leisure tourists.

Despite the general resilience of tournament golf sponsorship, many smaller or regional circuits have seen stagnating or declining purses for prize money. Equally, while the PGA Tour and especially the European Tour have enjoyed growth over the past 20 years, the search for future growth is turning towards emerging markets.

The success of South Korea’s women professionals – 11 tournaments on America’s LPGA Tour were won by South Koreans in 2009 – followed by Y. E. Yang’s major victory at the PGA Championship last year, signals the arrival of Asia as a potential future superpower in golf.

Andrea Sartori, head of KPMG’s Golf Advisory Practice in EMA, said: “The combination of significant media attention in Asia due to the success of professional golfers from countries such as Korea, and an increasingly affluent middle class in populous Asian markets such as China and India, could unleash a huge drive in the sport.

“Equally, South America and, more particularly, Brazil, which will host the 2016 Olympics, offers significant potential. The country’s continued rapid economic development could, in time, be matched by new golf courses and golfers. With three in every 10,000 people playing golf in South America and a total population of nearly 380 million, there appears to be a significant development opportunity to satisfy both local demand and international golf tourism demand.”

Commenting on the PGA Tour’s discussions with bodies in South America to establish a tour in Latin America that could eventually feed local talent to its existing tours, Andrea Sartori said: “These developments suggest that the growth of professional tournament golf is expected to be fuelled by emerging economies rather than the traditional golfing markets of Europe and North America. However, these markets, and their respective tours, are still expected to remain the dominant forces in the global golf industry for the foreseeable future.”

“It is true that over time, especially the past 10 years, professional golf has benefited from increased exposure, interest and participation, which has translated into higher tournament purses for the players. Like many business segments across the world, the recent economic slowdown has impacted the professional game as well. The end result may be an evolution of purses levelling off at the very least and potentially a reduction in some cases. I think we may also witness a reduction in the number of events available for players. Having said that, I am very confident the game and the tours that showcase the best in the world will continue to succeed, although that success may simply be measured differently than in the past.”

“The exponential growth the professional game has experienced will undoubtedly slow down, and in fact already has in the USA and Europe. The good news is that I feel this will be replaced by Asia and South America as their tours grow organically. What we really need more than ever is a more global approach to the game with more consolidation of all the different tours and more co-operation by the different governing bodies, commissioners, players and sponsors. This is essential ahead of the 2016 Olympic Games in Brazil.”

“The best advice I can give to the young professionals on the Tour is to always reflect the game in its best light and show that you respect what the fans and other supporters of golf mean to your success. Give of your time when you are not actually playing or practicing through interaction with them, be it autographs, a few friendly words or even just a smile or nod of the head. You’d be surprised how much such gestures are appreciated and remembered.”