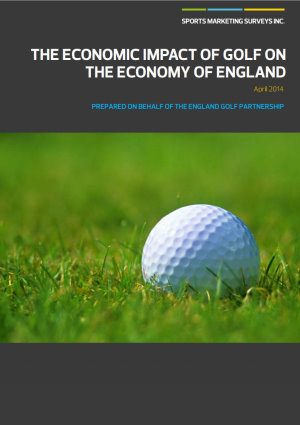 The value of the game is revealed in a new report, commissioned by the England Golf Partnership and prepared by SPORTS MARKETING SURVEYS INC.

It shows that one person in every 19 in England plays golf at least once a year – a total of 2.8m – and that the sport’s contribution to the economy includes:

The report states: “Even in difficult economic times and against a background of concerns that the game may not be being played to the extent that it once was, it is still a huge contributor to the English economy with an economic contribution of £3.4 billion.”

By comparison, the Manchester United sports franchise was reported by Forbes in January 2013 to be worth £2.1 billion.  The Premier League is reportedly generating £3.4 billion from domestic broadcasting over the next three years, says the report.

Roger Moreland, the EGP’s Chief Operating Officer, commented: “Golf is hugely important to the economy of England and has the potential to make an even greater contribution. This report shows the scale of the golf industry and underlines the importance of developing the game and growing the number of regular golfers and club members.”

In total, golf’s £3.4 billion annual contribution is equal to £61 for every man, woman and child in the country. This is expected to grow as the national economy improves and is coupled with robust efforts to recruit and retain new golfers and to encourage lapsed players back into the game.

In particular, the report identifies the “immense” opportunity for further growth if more women can be attracted into the game.

The country currently lags behind the other main European golfing nations with its proportion of women players: in England around 14 per cent of golfers are women; in the leading European countries the figure is around 30 per cent.

The report also anticipates greater revenues from tourism and real estate as the economy recovers.

The England Golf Partnership brings together the amateur governing body, England Golf, and the Professionals Golfers’ Association to grow the game with the support of the Golf Foundation and Sport England National Lottery funding.

Click here to read the full report: The Economic Impact of Golf on the Economy of England.