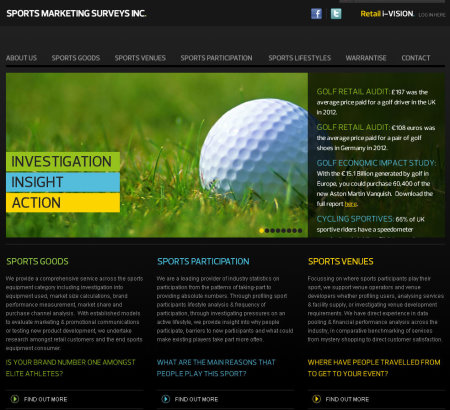 Leading sports research consultancy SPORTS MARKETING SURVEYS INC. has completed its ‘Golf Rounds Played Report 2nd Quarter 2013’ (April, May, June) and for the first time in over a year this charts an average increase in rounds played across Great Britain.

While heavy rain in Scotland in April saw that region suffer a decrease (7.2%), the average number of rounds of golf played in GB as a whole for the second quarter of 2013 increased by 5.6% on Q2 2012. A warmer June saw rounds played up 15.9% nationally for that month.

The Golf Rounds Played Report 2nd Quarter 2013 is now available to all companies who have an interest in the GB golf market.

Richard Payne, Senior Manager of Sports for SPORTS MARKETING SURVEYS INC., said: “Given that July has already provided some excellent weather around The Open Championship, there is reason to be optimistic for some further good news in Q3, including in Scotland of course where the weather has been much kinder.”

Nationally, there will be much interest in the Q3 results this year as these will be compared with Q3 2012 when the Olympic Games in London were being staged to such public acclaim.

Richard added: “We find that our Rounds Played Reports are really useful to our clients because of the level of detail contained within them, allowing the user to get a head-start in forecasting demand and spotting trends.

SPORTS MARKETING SURVEYS INC. has been providing results for Rounds Played for the industry since year 2000. These readings help leading golf companies and are particularly valuable when combined with other areas of the company’s research, such as its UK & European Retail Audit, the annual Golf Participation Study and also the Syndicated Consumer Programme, the latter two both involving interviews with a wide range of golf consumers to offer strong insights into current habits and preferences.

Richard Payne added: “All of these pieces of research help our new and established clients to understand the consumer more completely, and of course knowing your market is crucial for the success of any company.”