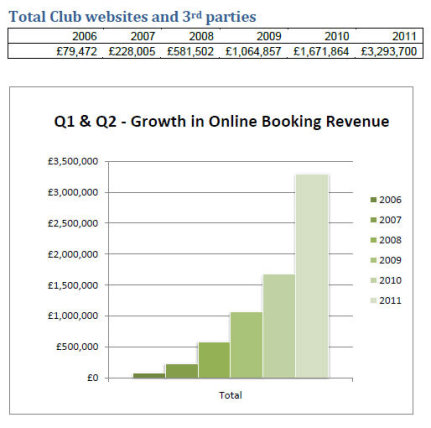 Online tee time booking revenues in the first six months of 2011 at clubs using the BRS Golf system – www.brsgolf.com – grew by 97% compared to the same period in 2010.

The continued growth of online bookings made directly through golf clubs’ websites using BRS Golf and through 3rd party marketing channels, are unparalleled according to Dr. Brian Smith: “When you consider that just three years ago in 2008, the equivalent tee time revenues were £581, 502 and that they have since grown by a factor of six, you start to understand how big an impact online booking is making on golf clubs’ bottom lines. It’s unparalleled.”

Smith feels no-one should be surprised: “Those who pay and play comprise some 75 to 80% of the golf market, and that’s around 3 million golfers in the UK alone. Nearly all of them will have a mobile phone, a smart phone, or a computer at home or in their office, so it’s hardly surprising that so many people are now arranging their golf online.”

Sales Manager Bob King is seeing the same trend: “Clubs in the UK and Ireland are approaching us in greater numbers than ever before to buy our market-leading online diary and booking system. With 600 clubs now using BRS Golf, compared to around 500 at the end of 2010, BRS Golf is experiencing its best level of sales compared to any other period.”

An investment that improves a club’s bottom line

Smith continues: “Clubs are investing in BRS Golf’s online Diary and booking system because it brings many benefits, not least that of increased revenue. In the first five days of May this year most of our customers found the BRS visitor booking module paid for itself through online bookings alone. The rate in May equates to an average online visitor income of £14,000 to £16,000 per club by the end of 2011.”

“Oundle GC made over £6,000 in six months using BRS Golf and any golf club could emulate what Oundle has achieved.”

Smith explains how any club can continue to let their members play when they want, while selling tee times: “With our system it’s really easy for any golf club to identify their available tee times, ie. those quiet periods when their members don’t tend to play.”

“Having done that, it’s just as easy to then market those times either directly through people looking for times coming to a club’s website, or going through the marketing and distribution channels like Teeofftimes.co.uk and Online Tee Times.”

“Using our technology in this way keeps their members happy. They can still play when they want to, while the visitors can play at the times the club chooses, at the rate the club manager wants to set. And all that extra income helps to keep the subscriptions down as well.”