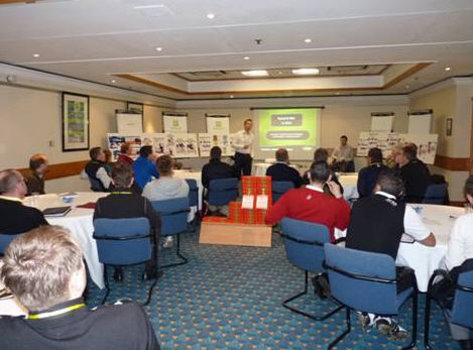 Foremost Golf members all over the country have seen significant increases in their shop sales after implementing the new retailing techniques they learned while attending the Group’s recent series of ProShopRevolution Workshops.

Andy Martin, Foremost’s Company Director, also gave an overview of this season’s Store Promotions for all Foremost Professionals and how they have been designed to generate increased sales in 2012. The workshops also saw the launch of the ‘Foremost 2012 Golf Ball Project’ with the simple objective of growing the professional shop golf ball business through modern retail best practices.

Durham and Bird also explained how Foremost members could change their members’ perception of their businesses, how to make their shops more attractive to potential customers and how to increase customer spend per head and much of the advice they provided has already produced significant results.

“The good news is that we have already received a lot of positive feedback from members who attended the recent ProShopRevolution Workshops with several of them telling us the advice they received has helped them to record significant increases in their shop sales,” saidDurham, a veteran of over 25 years working in the retail business.

“Generally, it would seem members found the Workshops very useful and we have already started to plan another series for early next year.”

The main aim of the ProShopRevolution Workshops was to help members learn the tricks of the trade they will need to compete successfully against High Street and internet-based retailers.

“It was very successful,” said Clive Bonner, the Head Professional at Bramshaw Golf Club. “I’d like to thank Peter and all those involved with organising the Workshop in Guildford. Taking two of my staff was the best investment I could make this early in the season.

“Since attending the Workshop last Wednesday, we have re-positioned our golf balls and downloaded the signage for multi-buys and have seen a 116% increase in sales compared with the same seven day period last year. That’s pretty impressive, particularly as the Sunday that week was a complete washout.”

Phil Cundy, the Head Professional at Droitwich Golf  & Country Club, has enjoyed similar results since attending the Workshop in Birmingham.

“Having attended the Spring Workshop on March 5th I would like to congratulate Foremost on a fantastic day,” he said. “The Workshop was very well organised, as per usual, and I gained some great knowledge on the day.

“I have come away from the Workshop with some great ideas which I have put into effect straight away,” he added. “Multi-buy deals have been an amazing success. I have used this on tees, hats, gloves and balls. In the first week, I have never sold so many dozen boxes of balls.

“In the coming week, I plan to implement multi-buys on many other products. I am also advertising the MRRP a lot more and this has given a great perception of value”.

Foremost members who would like advice on improving their retailing techniques should contact the Membership Services team at Membership@foremostgolf.com