Mike Davis, CEO of the USGA, which has partnered with Rolex since 1980, was speaking at Shinnecock Hills Golf Club at the 118th U.S. Open where he discussed U.S. Open venues, rolling back the ball, and the new world handicapping system. For more information visit rolex.com

Q: Where would you rank Shinnecock among U.S. Open courses?

MD: It’s one of my favourites, but you get to a point where they become like children, and I’m not suggesting I’m the parent here, but you love them all. This one [Shinnecock Hills] is historic, it hosted the second oldest U.S. Open in 1895, it is fabulous architecture, and it’s windy too and I think the two things beyond the architecture that really make the game challenging for players is when the ball’s bouncing and when it’s windy, and we’ve got both of those to the nth degree right now.

It’s very, very challenging right now. When you get these conditions, really the only thing you can try is to just slow things down, but to get back to it, we love this place. We’re coming back in 2026. The course has been restored to its original architecture, for example the greens have returned to their original size. It’s closely mown around the greens as per the original design, and there was rough up against it, bunkers were covered up, so I think it’s become a much better golf course for that.

Q: Two successive U.S. Opens are taking place on links-style courses, with Pebble Beach hosting next year. How does a links set-up alter the USGA’s role in terms of course preparation?

MD: Pebble Beach is not as old as Shinnecock Hills, and we didn’t start U.S. Opens there until 1972 when Jack Nicklaus hit that famous one iron, then 10 years later Tom Watson chipped in on top of Jack Nicklaus to win that one. It’s certainly one of the most famous and beloved courses in the United States. Oakmont’s another that has hosted U.S. Opens, and Pinehurst is unique…but there’s a bunch of great ones.

Q: There will be a new U.S. Open venue in 2023 – Los Angeles Country Club. What will that venue offer and how excited are you to take the U.S. Open to LA?

MD: It’s an old George Thomas design, which he built in the 1920s. The same architect as Riviera and Bel Air, so you’ve got that.

Q: Can you talk about Rolex’s longstanding role as a partner of the USGA and the value of that partnership?

MD: Well, let me start out by saying it goes back to 1980. Until about 10 years ago, we did not really have corporate partner relationships except for Rolex, and Rolex has been involved since 1980 on things that we do in the governance of the game – which we do together with The R&A.

They [Rolex] help underwrite our Rules of Golf programme and when you think about what’s happened since we elevated that relationship a dozen years ago, they have really got involved with both our professional and our amateur events. Now, with our rules modernization programme they’ve been very engaged with the educational part, both with The R&A and the USGA.

Our new handicapping system, which launches January 1, 2020; Rolex will be a big part of that. They’ve done the Rolex World Amateur Golf Ranking, which has been a great thing both on the men’s and women’s side for the game of golf.

It’s been a terrific relationship and it’s only been enhanced, because with Rolex they take a long-term view of what’s right for the game, so as we move forward now, just this year, for the first time at the U.S. Open there is limited commercial interruptions, so the last hour will have no commercials, which is neat.

We will be able to, in those commercial times, show a variety of segments, for example on players, and other aspects of the game, which for viewers is terrific. It’s good for Rolex and it’s certainly good for us.

In addition to that, we just launched, in the last month, a new digital library, so you can go back to 1985 when the first U.S. Open was played and see a segment on every U.S. Open, whether it’s the 1913 U.S. Open that Francis Ouimet famously won, coming out of nowhere as a no-one, or right up to last year.

We’re doing some marvellous things with Rolex and we’re excited about it – for the amateur game, for the governance and for the professional game, so sincerely Rolex is one of the most special partners we have.

Q: Almost every year, Jack Nicklaus brings up rolling back the ball. What are your current thoughts on that? 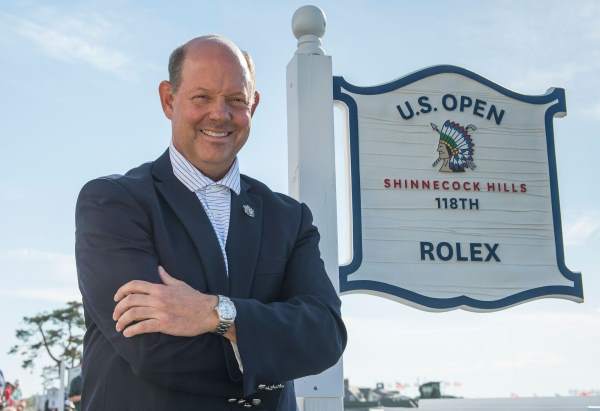 MD: We, the USGA and The R&A, put a statement recently to say that we are involved in a study called Distance Insights, and while the issue of distance has been discussed and debated for more than 100 years in terms of how golf courses have continued to expand, how equipment innovation has occurred, what we want to do is collect data from all areas of the game – not just on the elite game, but for recreational golfers too and this study is not just about the elite golfers, but it is a holistic view of the game.

We haven’t gone into it from the standpoint that “these PGA Tour players are hitting it too far,” it really is a long look at what’s happening with golf courses, how they’ve had to change, and most importantly looking into the future for the enjoyment of the game, the recreational game, the sustainability of the game, and what might get done, if anything, if something happens.

In a year, or a year-and-a-half from now, when we have collected all this data – and we already have a lot of this, but there’s also a lot that we don’t have – so, in 12 to 18 months, we’ll have spoken to stakeholders, whether they’re an architect, an elite player, an owner or operator, and equipment manufacturer, to ask how increased distance over the years has historically you and your area of expertise, what’s happening now, and looking to the future, what might happen then?

This issue, this discussion, is not going to go away and it’s incumbent on the industry to ensure that the game is healthy and is enjoyable and something that can sustain itself for years to come.

Q: The game has never been easier for the recreational golfer with equipment as good as it is, and yet participation numbers are down. How do you reconcile those two things?

MD: I guess the question is whether or not there’s a correlation between those things. I’ll start with the United States simply because I’m familiar with its numbers. Our numbers are very stable, but the number of junior golfers is actually growing. We’ve got more junior golfers than we’ve ever had right now. More female golfers, more non-Caucasian golfers, so I think from that standpoint, in the United States, we would actually say that it’s pretty healthy.

The number of rounds is creeping up slowly, but the one thing that is concerning to us, is when you look at the health of golf courses. We have one out of four golf courses in this country that are feeling some kind of financial pinch, and so we’re looking at that.

The costs of maintaining courses are going up, the cost of inputs from water, to fuel, to fertilizers, and you can grow the game all you want, but if you’re growing it with unsustainable places to play then we have to think about that in a very serious way.

As we look at this big picture of the health of the game going forward, distance is only one part of it. In the US we’ve reduced water usage by 22 per cent, we’ve reduced the amount of nutrients used on course by a little more than 40 per cent, so while those are things that nobody wants to talk about, none-the-less they’re important things for the game of golf.

Q: You’ve been involved with the USGA for almost 30 years. Which achievements in that time are you most proud of? And what are your main priorities for the coming years?

MD: When you look back at the governance of the game, we’ve modernized the rules, we’re making them simpler, which you’d hope that would be something that makes the game more welcoming, and much easier to learn than the old rules.

We’re developing a worldwide handicap system – this is one of many great things about the game, where players of differing abilities can play on an equitable basis. You can’t do that in other sports, but you can in ours. Though, right now, we don’t have the same handicap systems around the world, so for me to go and play on an equitable basis with someone from Australia or Japan or from Scotland, it’s not quite comparing apples with apples. This is a positive thing.

From standpoint of our events, we’ve started the Latin America Amateur Championship, we’re having our inaugural Senior Women’s Open Championship this year. We have more entries in our women’s championships than we’ve ever had, so I feel like we’ve done a lot of good things.

Maybe the biggest thing, which doesn’t get written about a lot, beyond our Grow the Game initiative, is that we’re doing so much for golf courses themselves. Best practices and how to maintain golf courses at a quality level, at low cost, and make the game more enjoyable to people who play, including pace of play.

Q: A large number of entries to the U.S. Open have come about from qualifiers. Are you looking to expand those opportunities for golfers around the world, in Asia especially?

MD: We are always looking at this. A little more than 9,000 people tried to qualify for the U.S. Open this year, so it’s the biggest event in the world in terms of entries, and we try to balance that out between those who’ve earned their way in by exemption.

This year we have 78 exempt players and 78 that earned spots in qualifying from those 9,000 people who tried, and we have tried to expand that qualifying around the world and we will continue to look at that where it makes sense.

Q: American golf looks to be in a great place at the moment, with US players holding all four men’s Major titles. How exciting is that for the USGA and how much are you looking forward to seeing Team USA in Ryder Cup action later this year?

MD: I am the last person that should comment on that. [laughs]

I think it comes and goes. Isn’t that the great thing about sport? Right now it may be the case, but in two years from now, maybe not. Look what’s transpired in the women’s game. What’s clearly transpired is that it’s more and more of a global game. It’s a good time for golf right now.

The USGA has partnered with Rolex since 1980. For more information visit rolex.com

After previously suffering with the side effects of excessive thatch content, the course manager at Gillingham Golf Club in Kent has praised a programme from Headland Amenity for its role in transforming the health and presentation of the greens.