The 2016 Ryder Cup matches mark a milestone in the history of the Ryder Cup European Development Trust (RCEDT), as it is ten years since the Trust began supporting grass roots golf projects across Europe.

Over 35 projects in 29 European countries have been supported helping thousands of people of all ages get into the sport and continue to participate and enjoy their golf.

The RCEDT uses its share of the net profits from European Ryder Cup Matches to contribute to golf projects across the continent, reflecting the vastly international reach of the event and providing the opportunity to give back to the sport.

The Trust itself was formed in 2004 when a new Ryder Cup Europe agreement was drawn up to include the PGAs of Europe alongside the PGA of Great Britain & Ireland and the European Tour. But it was only after the home matches in 2006 at The K Club in Ireland that the Trust was able to begin distributing funds to a variety of projects across the continent. 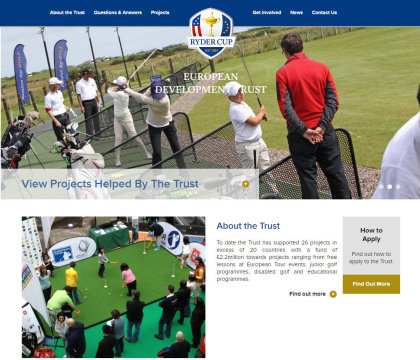 Over 35 Projects have been awarded RCEDT funding ranging from individuals all the way up to governing bodies, with a focus on education and development at the heart of initiatives.

The Bulgarian Golf Association then also received support helping to implement golf coaching in schools and introducing juniors to the sport through summer camps and competitions across the country, utilising the PGA of Bulgaria’s Professionals as a development workforce.

“At an early stage of Bulgaria’s golf development, the RCEDT funding give us credibility as an emerging nation,” says General Secretary of the Bulgarian Golf Association, Seth Underwood. “Also at that time the financial assistance was key to supporting the setting up of the programme, providing equipment & transport, and was the driver to get us to where we are now.”

Following the successful staging of the 2010 Ryder Cup in Wales, Golf Development Wales received ongoing support that helped to introduce 160,000 children and beginners to golf, provide regular coaching to 31,000 people and allow over 250 club volunteers, PGA Professionals and secretaries to attend workshops or receive mentoring.

Many other projects have received support such as the PGAs of Europe’s education programme, enabling the continued education and development of golf and individual PGAs; the Robert Kalkman Foundation, helping to support children with cancer and/or a physical limitation; the Italian Golf Federation’s opening of the first public golf training course in Italy giving access to the public for little to no cost.

Various PGAs and Federations have been helped with the training of PGA Professionals and volunteers to develop themselves and the sport; the European Tour and Portuguese Golf Federation for their respective roadshow-based coaching activities at various venues, and the Paul Lawrie Foundation in their work in bringing juniors into the sport and supporting them through their golfing careers.

“Over the past 10 years the Trust has played a hugely important role in developing golf in Europe,” said RCEDT Chairman, Mikael Sorling. “The Ryder Cup is known around the world for being a melting pot of European excellence so it is important that we shine a light on the developmental side of the Matches as well and how the professional game gives back all around the continent. The RCEDT’s support comes not only out of high performance but also from everyone who has supported the Matches on European soil over a decade.

“We look forward to being able to support the development of our sport over the next 10 years and beyond.”

To find out more about the projects that have received RCEDT support visit http://rctru.st/10YearsOfTrust

(includes details of how to apply)