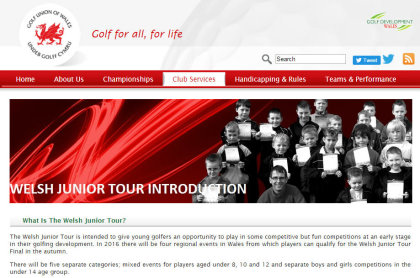 The Golf Union of Wales is starting a new Welsh Junior Tour to encourage young players of all standards to take part in some fun competitions building to a national final.

The new initiative will include mixed events at Under 8, 10, and 12 age groups, separate boys and girls competitions at Under 14 level, with four regional events allowing players to qualify for the Welsh Junior Tour Finals in the Autumn.

“This is an exciting new competition which will combine participation with development, the growing junior initiatives of Golf Development Wales, the Coaching Centres Programme and the work at many clubs meant we needed to add this opportunity.” explained GUW chief executive Richard Dixon.

“Children of all standards can play, children with disabilities can compete on level terms, this new Tour will be both fun and competitive. It is open to anyone born in Wales, with Welsh parents or grandparents, who lives in Wales or is a member of a golf club affiliated to the GUW.

“The only people not allowed to enter is anyone with a handicap of nine or lower at the start of the year, because we already run competitions at the elite end to cater for those players.

“There is no need for an official handicap for the younger age levels, which will be played over shortened nine hole courses appropriate for their age. They will score at least one point on every hole in a modified Stableford scoring system which also rewards the lower scores.

“In the U14 categories players must have a competition handicap which means 28 or less for boys, 36 or less for girls or a disability golf handicap of up to 54. They will play an 18 hole competition under normal Stableford rules. The top three players in each category will receive a prize at every event.

“There will also be skills challenges running alongside the competitions which will cover long game, chipping and putting which should provide extra fun as well as being a good way for players to see how different parts of their game are improving.

“We hope this initiative will provide a real boost and focus to the development of the game for younger golfers in Wales, offering them a target of a fun, national competition as they learn and improve.”

The Under 14 competitions will be under the normal rules of golf but the younger age groups will have some additional rules to help them, such as a free drop after three attempts to get out of a bunker and picking up after 10 shots while still scoring a point on the card. Players with a disability can play under appropriately modified rules.

Parents or guardians must accompany children at the events. The detailed rules for Welsh Junior Tour events can be found on the ‘specific’ and ‘general’ conditions sections of the entry form.

Players can choose which events they wish to enter (players may enter as many as they like) by going to the entry forms and on-line entries page in the Welsh Junior Tour section of the GUW website (under the championships heading) or by following this link; Entry Forms.

Entries can be made on-line or by printing out and posting or emailing the completed form to the GUW offices. The U8, U10 and U12 categories cost £5 per event to enter and the U14 categories £10 per event.

The names of the individuals, teams and venues in golf have been unveiled for 59club’s 10th Annual Awards Ceremony, which takes place at at Forest of Arden Marriott Hotel & Country Club, March 12-13.

American golf and lifestyle apparel brand All 19 Holes has unveiled a new polo shirt that is made entirely from recycled polyester.