New Official Guide To The Rules Of Golf Out Now

The complete official guide to the Rules of Golf and their interpretations, which replaces the Decisions on the Rules of Golf, is the result of seven years of consultations with all of golf’s key stakeholders, which has led to implementation the most comprehensive rules changes seen in the game for almost 40 years. 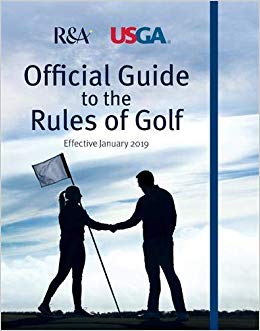 In a bid to make the rules more accessible and easier to understand, the R&A and USGA have reworded every rule and made alterations that will affect the way every golfer in the world plays the game.

“We need our rules to be more accessible and to be easy to apply and understand,” said David Rickman, the Royal & Ancient Golf Club’s Executive Director of Governance. “And we believe that the new rules are more in tune with what golfers would like, and are easier to understand for everyone who wants to enjoy playing this great game. There is enough flexibility so that they can encourage and be inclusive to anybody who wants to play golf, and wherever they want to play it.”

The new rules, which come into effect on January 1, 2019, will be reduced in number from 34 to 24, and some of the changes will create ripples throughout the game. As well as speeding up the pace of play and making the game more approachable with the use of plainer English, many of the changes are also a reaction to a litany of minor infringements that have occurred in tournament play in recent years that have resulted in harsh punishments.

The key changes include no penalties for accidentally moving a ball on the green or when searching for a ball; no penalty for touching or lifting loose impediments in a bunker; no penalty for double hits, or if your ball hits you, your equipment, your caddie, or a flagstick left in the hole; players who lose a ball have the option under a local rule to drop the ball ‘in the vicinity of where the ball is lost or out of bounds’ under a two-stroke penalty; all damage to greens – including spike marks – can now be repaired; the time for searching for a lost ball has been reduced to three minutes; and the ‘furthest from the hole plays first’ etiquette has been dropped in favour of ‘ready golf’.

The Official Guide to the Rules of Golf is published by Hamlyn and costs £22.

The next generation of Titleist’s Pro V1 and Pro V1x golf balls made their debut on the PGA Tour at last week’s Sanderson Farms Championship.