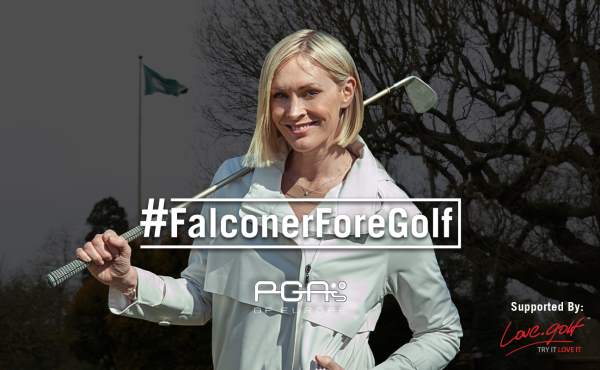 The PGAs of Europe, in conjunction with love.golf, have launched a new activity focused on guiding British television and Heart radio presenter, Jenni Falconer, through the process of being introduced to golf, learning and ultimately becoming a fully-fledged golfer.

The activity aims to shine a light on the journey that female golfers can take to get into golf, looking at the various challenges, questions and benefits that can be experienced by women and girls.

Jenni’s experiences will act as a live case study detailing her progress as she learns more about playing golf and becoming a golfer, and as she builds up to her first big challenge – competing in the Pro-Am for the European Tour’s GolfSixes event at Centurion Club, less than three months after picking up a golf club for the first time.

“I’ve always wanted to play golf, and I decided that 2018 was the year I was going to learn…I’ve never played before so I want to know if it’s possible and if I can do it,” says Jenni. “Luckily I’ve recruited some friends to help me try and achieve it, and the PGAs of Europe have added the extra challenge of giving me just a few months to go from a complete novice to competitor in front of spectators!

“It baffles me as to why women in general aren’t playing as much golf – they’ll go and join a gym, they’ll go to a spin class but they wouldn’t think ‘I want to go and play golf in my free time’. So my aim is to show that we should be going to play golf, it is possible and it is something that is just as enjoyable as all the other activities women do in their spare time. Golf can appear to be one of the least-accessible activities at the moment and it does seem to be a such a male-dominated sport so let’s change that!”

Backed by ground-breaking research, love.golf is a proven approach to women’s coaching, delivered by a community of coaches who engage, inspire and progress women in the sport. Joanne Taylor (PGA of GB&I), one of these coaches based at Tyrrells Wood Golf Club just outside London, is leading Jenni on her journey alongside love.golf creator and Head Coach Alastair Spink (PGA of GB&I), who is also a member of the PGAs of Europe Golf Development Team.

Jenni is developing her golf ability through the programme, which is distinct in the way it develops women through experiences and by playing on the golf course rather than a more traditional practice range-based approach. This is supported by academic studies conducted by Alastair Spink and ground-breaking female participation market research by Syngenta, which has received international acclaim.

Starting her golf journey as a complete beginner, Jenni will act as a great example to many female golfers coming to the sport for the first time, as well as becoming an ambassador for women’s golf in general with a wide-reaching and specifically non-golf social media and listener audience that will help communicate the great health, social, wellbeing and enjoyment benefits that golf has to offer.

“The PGAs of Europe are totally committed to advancing golf, and there has been a great deal of recent publicity around the opportunity to make golf more appealing to women, girls and families, which we support wholeheartedly,” said PGAs of Europe Chief Executive, Ian Randell.

“Jenni will no doubt inspire women and girls to try golf, and we hope to replicate this golf development activity model in multiple countries where local female ambassadors can be utilised to share these messages.

“She is a joy to work with – her motivation to continually better herself and learn more has meant that she has made huge progress in a short period of time.  We are delighted that she has chosen to get into golf, and I am sure she will prove to be a fantastic ambassador for our sport.”