England Golf’s support for clubs, through its county and national networks, encouraged over 135,000 people to try the game and over 9000 to become club members in just six months.

The figures are shown in the latest County Impact Report, which covers April-September 2016 and details the success of initiatives to grow the game and keep people playing.

County Development Officers, working in partnership with county unions, associations, the Golf Foundation and the PGA, connected clubs with national campaigns and helped them to recruit and retain members and strengthen their business structure.

Clubs have been able to take advantage of the highly successful Business Growth Hubs; demand-led workshops; and support to help them understand their local market before making investment and marketing decisions. 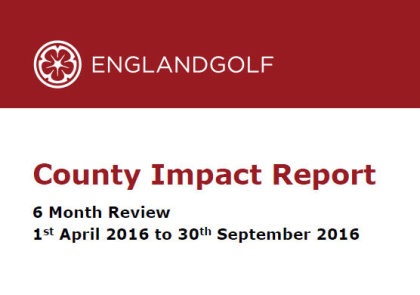 As a result, the number of people trying golf is up 47% on the same period last year and over 43,000 have taken coaching courses of at least four weeks. Meanwhile, there’s a growing commitment to regular play, shown by a 26% increase in new memberships, which include trial and introductory packages.

England Golf Chief Executive Nick Pink said: “Clubs are at the centre of everything we do and it’s very satisfying for our county teams to work with them to achieve these results. Now, we all look forward to building on these successes and helping clubs to become even stronger.”

Campaigns include Get into golf, supported by Sky Sports, which received over 700,000 hits on its getintogolf.org website from people interested in beginner golf opportunities. Over 730 clubs have used the website to promote more than 13,000 activities and attract over 32,000 beginners. An increasing number of Get into golf beginners are joining clubs, with almost 5000 becoming members this summer, compared with nearly 4000 last year.

During the summer a number of new ventures were launched, including Golf Express, which promotes shorter formats and particularly 9-hole golf on the http://www.golfexpress9.org website. It encourages busy people to play more often, telling them that it’s ‘all the game in half the time.’ It was successfully trialled in Staffordshire, helping to retain current players and attract returners by offering a playing opportunity that fitted in with their lifestyle.

June was dedicated to highlighting the ongoing golfing opportunities for women and girls under the banner of #ThisGirlsGolfs. Encouragingly, 40% of all those trying golf were female and clubs are successfully attracting them to women-only Get into golf sessions and into membership.

July turned the spotlight on golf as a game for all the family. Clubs were encouraged to run open days and existing golfers invited their families to share their pleasure in the game.  These events helped to attract new visitors and members. Marketing materials were available to clubs for both focus months, which will be repeated in 2017 as part of England Golf’s promotional calendar.

Girls Golf Rocks – a project run jointly with the Golf Foundation – successfully attracted 600 girls in nine counties to try golf, helped by the promise from young ambassadors that it’s a fun and sociable game. Over 500 went on to take coaching courses and more than 200 have become club members. Next year, Girls Golf Rocks will be run in 15 counties.