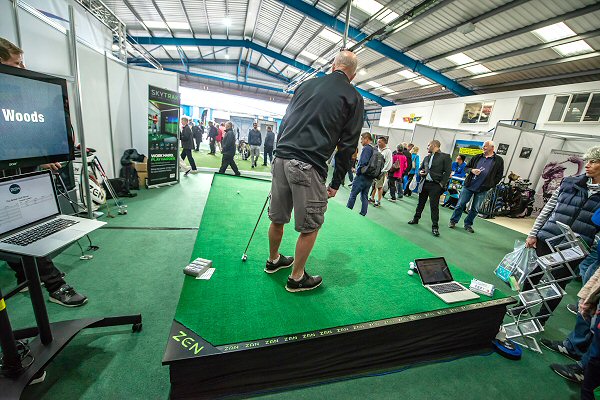 The Zen Green Stage wowed golfers on both sides of the Atlantic simultaneously last week with appearances at the British Golf Show and the 2019 PGA Championship.

At the inaugural British Golf Show, golfers swarmed around the Zen Green Stage on both days, queuing for over 45 minutes to try their chances on it, with valuable prizes at stake for those who could master the adjustable putting platform’s fiendish slopes.

At the same time Sky Sports used a Zen Green Stage in their studio at Bethpage Black, near New York, to enhance their coverage of the 2019 PGA Championship, the year’s second Major.

“People were in awe of the Green Stage at the British Golf Show, and had a great time on it” said Zen’s Nick Middleton. “The talk was all about how they has seen it on Sky Sports, and were itching to have a try themselves. We were thrilled with the size of the crowds, particularly on day two when the Saturday audience kept us going flat out until the very end. And even then we had exhibitors queueing to use it after the show had closed!

“Each time the Green Stage moves into a new position, a buzz goes around watching golfers like a little bolt of electricity. We actually get oohs and aahs as people see the slopes change, and watch other golfers step up and take them on.”

“The Zen Green Stage was undoubtedly one of the biggest draws at the show” said Alex Ayling at The Elite Luxury Events, organisers of the British Golf Show. “We couldn’t believe the queues to have a go on it. Golfers are clearly fascinated by it, and by the Sky Sports angle. Next year, we want two Green Stages here!”

SkyTrak and SkyCaddie European GM James Holmes said: “The evidence was plain to see at last weekend’s British Golf Show – the Green Stage attracts crowds, and it keeps them there too. It’s used by top golfers around the world, and so having one at your golf club or your home would be amazing.”

“The Zen Green Stage was a popular centrepiece at the British Golf Show” said Jason Wessely, Head of Golf at Sky Sports. “We have had the pleasure to work closely with Nick and the team to help with its development. It is a scientifically-proven product which enables our pundits to analyse putting in a very compelling way in the Sky Sports Shot Centre.” 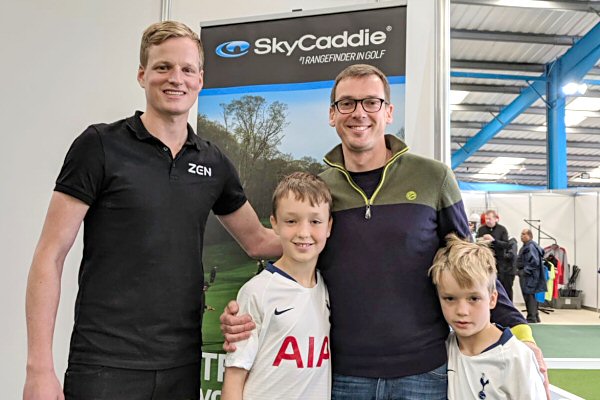 At the British Golf Show Zen staff had set up a series of putting challenges, recreating historic putts by Tiger Woods, Jack Nicklaus, Seve Ballesteros and Graeme McDowell on the Green Stage.

Everyone who took the challenge picked up a £200-off SkyTrak voucher, with the leading contestants all winning valuable prizes.

The overall winner was eight-year old junior golfer Sam Whitaker (pictured), who picked up a SkyCaddie SX500 worth £379.95 having conquered the ever-changing slopes on the Green Stage with an amazing sequence of deadly-calm putts – off a handicap of 41.

“Using the Zen Green Stage is one of the most addictive experiences in golf,” said Middleton. “More and more people are now realising that it is available to buy, and not just something you see on TV.

“We are working as fast as we can to fulfil the ever-growing number of Green Stage orders from golf clubs and golfers around the UK and throughout the rest of the world.”

See www.zenoracle.com for all details.