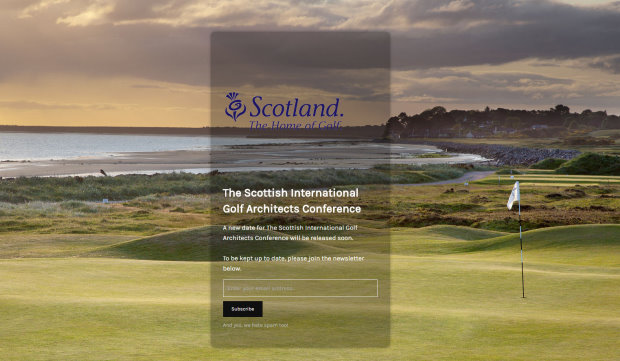 Leading clubhouse architect Mungo Park, the great grandson of the first Open Champion, is to address a major conference in Scotland examining past, present and future course designs.

Mr Park, founder of Mungo Park Architects in Gloucestershire, will deliver a keynote speech at ‘Design Masters: The Scottish International Golf Course Architects Conference’ being held in Inverness on 1 and 2 March 2017 (revised dates).

The conference, which has confirmed a number of leading speakers from across the world, has been re-scheduled to accommodate a larger programme and a growing number of participants.

It will open with a civic reception hosted by the Highland Council and will celebrate the lasting impact on the game by the likes of Old Tom Morris, James Braid, Donald Ross, Willie Park Jr and Alister MacKenzie and their enduring effect on modern day design and internationally known courses including Royal Dornoch and this year’s Aberdeen Asset Management Scottish Open venue, Castle Stuart Golf Links.

The event, organised by the Golf Tourism Development Group, will be chaired by Adam Lawrence, editor of Golf Course Architecture magazine. Others already signed up to take part are Tom Mackenzie, from designers Mackenzie and Ebert and president of the European Institute of Golf Course Architects; Bradley S. Klein, architecture editor of Golfweek magazine and the founding editor of Superintendent News; Thad Layton, senior golf course architect at the Arnold Palmer Design Company, which is involved in plans to build a second championship course at Castle Stuart and Arnold Palmer’s first in Scotland; and Sam Thomas, manager of golf development at the Golf Environment Organization.

Mungo Park Architects have advised a number of golf clubs on new-build and refurbishment projects, including Royal Liverpool, Muirfield, Sunningdale, Gullane and Turnberry.

Mungo Park has a direct family link to golfing history. His great grandfather, Willie Park Snr, won the Open championship four times, including the first event in 1860. Willie’s brother, Mungo, also won the tournament in 1874, the first time it was played in Musselburgh.

Willie’s son, Willie Park Jr, won two Opens including the last to be played in his home town of Musselburgh in 1889. By that time, he had begun designing and laying out courses, his first being at Innerleithen in 1886, aged 22.

He was also a successful golf equipment maker and golf writer before becoming known as one of the world’s best golf course architects with 200 designs to his credit in Britain, Europe, the US and Canada, including Sunningdale Golf Club. He was inducted into the World Golf Hall of Fame in 2013.

Mungo Park has become a leading authority on his family and on the club makers of Musselburgh who took golf to the world around the turn of the 19th/ 20th century.

Mr Park said: “Between 1850 and 1900 the game of golf saw a dramatic transformation. Predominantly a ‘gentleman’s’ game, its growth and expansion was driven and fuelled by the many artisan club makers, professional golfers and ‘Keepers of the Green’ who received their training on the links courses of Scotland. Musselburgh in particular saw a huge emigration of golf makers to the furthest corners of the world and the history of golf is populated with the names of its club makers and professionals. The Parks, McEwans, Dunns, Gibsons, Days, Hoods, Gourlays, Fergusons, Campbells and Hutchisons were among the many famous club makers, who spread the game. Their story is both rich and fascinating and it charts the early days of golf.”

During the Design Masters conference, delegates will visit a number of historic courses in the Scottish Highlands, including Royal Dornoch Golf Club, which this year is marking 400 years of the game being played in the town’s links, Brora Golf Club, which is marking its 125th anniversary, and Castle Stuart.

Royal Dornoch was formed in 1877 and the first 18-hole course was laid out in 1886 by Old Tom Morris who extended the original nine holes and introduced the trademark plateau greens. It is also renowned as the place where Donald Ross honed his skills before going on to design some of the finest courses in the US, including Pinehurst No. 2 in North Carolina.

Neil Hampton, general manager of Royal Dornoch Golf Club, said: “Scotland is known as the Home of Golf and many of our early innovators like Old Tom Morris and James Braid were real pioneers on course architecture and helped raise the popularity of golf with their innovative designs.

“Old Tom Morris and Donald Ross both had an impact on the way Royal Dornoch developed and these and other designers are still highly regarded today as this conference will demonstrate.”