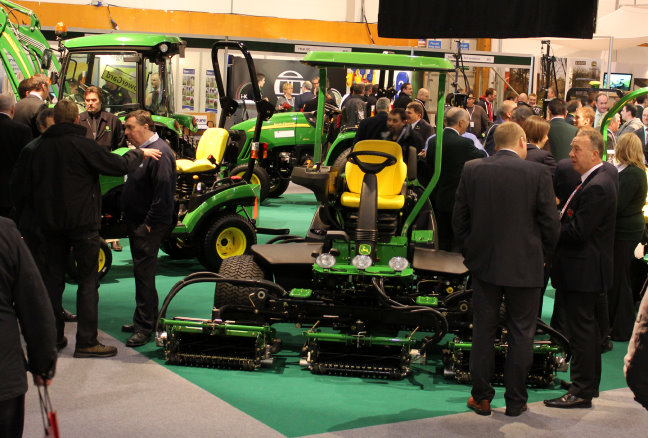 The feedback from exhibitors, both well-established and show debutants, at last week’s BTME is uniformly excellent. The mood can be summed up as ‘cautiously optimistic’.

“We were pleased with the level of attendance at this year’s show, and the quality of both visitors and enquiries was encouraging,” said Joedy Ibbotson, John Deere’s UK & Ireland turf division sales manager. “There was a refreshingly upbeat mood throughout the event, and people seemed to be more optimistic about the prospects for the golf industry and business generally in 2012.”

For Jacobsen, Peter Driver, Public Relations Officer, said: “There was a definite positive buzz in Harrogate this year with much improved footfall. BIGGA can be congratulated for their educational programmes and seminars, which were well attended and were, in my opinion, a contributory factor to the increase in attendance. From a manufacturer’s perspective we had a great show, both in the exhibition hall and at the networking and other events associated with Harrogate Week. BIGGA’s 25th Anniversary Dinner was a huge success and our sponsorship worked well for us. Without doubt Harrogate Week 2012 was one of BIGGA’s best events for a while. Long may it continue.”

David Rae, Managing Director, Wiedenmann UK, said: “I didn’t think I’d be saying this but it was a ‘classic’ show, the type you choose to remember. Quite literally we were overwhelmed by this year’s BTME. We’d five staff on our stand round the clock and none of us drew breath from start to finish. There was an infectious momentum across the whole event which made it the best BTME for about ten years with really positive leads and genuine budget available. We are hugely encouraged by this start to the year and have already committed to BTME 2013.”

In a message posted on GBN.com, Derek Smith of DLF says: “We had a fantastic show on the DLF and Johnsons sports seed stand. The demand for information on the new seed range was so great on the Wednesday we struggled to keep up and by mid morning Thursday we had actually run out! I think its a great sign that despite all of the gloom that the media like to constantly spread there seems to be a great level of positivity in the trade!”

“This was, without doubt, the busiest show we have had for some time,” said Stephen Bernhard of Bernhard and Company. “Several of the Bernhard team were very enthused by the level of interest and their positive conversations. It is also always good to see so many old friends, interesting companies, golf courses and trade visitors, all very well represented. This year there were some newcomers too – a good sign.

“I think everyone would agree with me when I say that the mood was one of hope and enthusiasm – which after last year, was uplifting and just what the industry needs.” 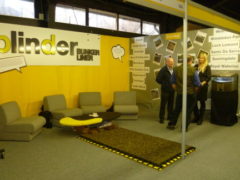 “Harrogate 2012 was again a successful event for the Blinder bunker lining team. Following on from last year’s launch, the event helped enormously to showcase the product and allowed us to support Blinder as their approved Installer. The show definitely attracted a large attendance this year with a considerable number of European enquiries,” said Louise Wyatt on behalf of her colleagues.

“Exhibiting at Harrogate not only enabled us to meet up with existing clients but also to present ourselves to new customers,” said Graeme King, managing director of Hugh King & Co. “We made a lot of good contacts over the three days and are now busy following up on leads. The show was certainly well attended and as sand plays such an important role in the turf sports industry, we were able to get our key messages out to the right people at the right time.” 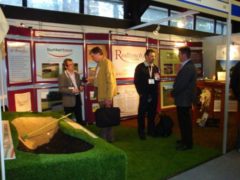 Lee Crosse, Director of Redlynch Leisure Ltd, says: “This was our first year exhibiting at BIGGA Harrogate and we were delighted with the positive response to Tiger Trak and Bunker Base, our innovative surfacing solutions. From start to finish the organisers were extremely helpful and able to accommodate our sometimes difficult requirements. We leftHarrogatewith an impressive number of leads and hope, on the strength of these to return next year.”

Among the visitors there was also great enthusiasm. Brian D Pierson, Chairman BAGCC, said: “This year’s Harrogate week was well supported and I felt the layout of the ‘Halls’ was more visitor friendly. Our industry is going through difficult times but the harder you work the luckier you get.”

First-time visitor Yvonne Alexander, golf PR at The Word Association, said: “BTME was great. There was a lot of optimism around the hall, which was encouraging. We created new brochures, a stand, DVD presentation and website for our client to coincide with the event. The feedback we got was very positive, and having the industry under the one roof meant we could meet up with key decision makers and build relationships.”

Ellie Parry of Forte Marketing and Public Relations summed up: “It was clear that social media contributed to the ‘buzz’ at Harrogate Week 2012 with an abundance of tweets pre and post-show from individuals and companies. The halls were busy and exhibitors were clearly determined to start the year off on a positive note, with brand new stand designs and a wide range of new products and services launched.”

Stephen Bernhard spoke for many when he concluded: “We had some very interesting conversations about the recession and its effect on the industry. I think it’s fair to say that most people agree that we are in for a long haul and that some years will pass before the Industry returns to where it was pre-financial crisis.

“All in all it was a great experience and we set off to Las Vegas and GIS later this month in a strongly optimism mood.”