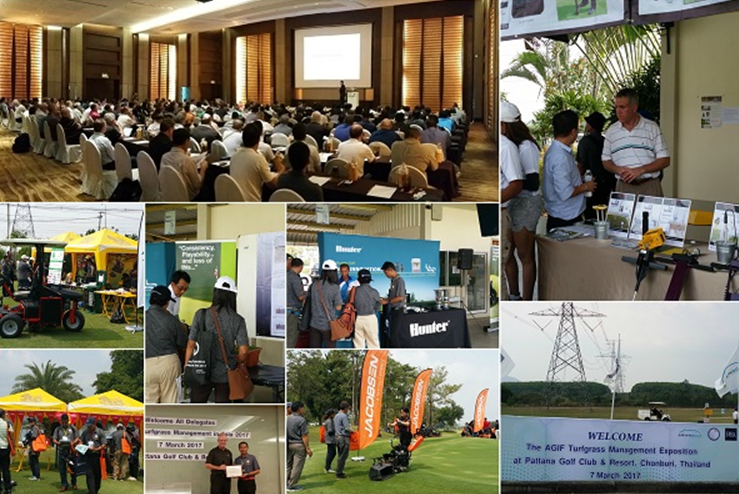 A new venue and a revised format were deemed an overwhelming success at the Asian Golf Industry Federation’s (AGIF) 2017 Turfgrass Management Exposition.

More than 250 course superintendents, club managers and industry representatives from 21 countries attended the fifth edition of the event that showcased the very latest in golf course equipment and machinery and, for the first time, was staged at the Pattana Golf Club and Resort.

Held under the auspices of the Thai Golf Course Superintendents’ Association (TGCSA), the Expo was part of a three-day gathering in the Central Thai beach resort that was highlighted by the ninth Asian Turfgrass Field Day and a high-profile conference on Sustainable Turfgrass Management in Asia.

The conference was organised by the TGCSA and the Asian Turfgrass Centre for the Thailand Golf Association, with support from The R&A.

Working closely with the TGCSA, the AGIF Turfgrass Management Exposition featured an array of equipment from 24 exhibitors as well as extensive product demonstrations. To accommodate the increasing number of attendees, this year it was split into two sessions, one in the morning and another in the afternoon.

Eric Lynge, the AGIF’s Chief Executive Officer, said: “On behalf of the AGIF’s Education Committee and members, we thank the TGCSA for their continued efforts to raise standards and congratulate them on their positive initiatives.

“Based on feedback we received in recent years, the format for this year’s Expo was amended with two separate sessions. This meant splitting the crowds and rotating the audiences. Ultimately this resulted in more direct and uninterrupted interaction between exhibitors and delegates.

“This year also saw us moving to a new venue, the Pattana Golf Club and Resort, an all-encompassing recreational sports resort destination dedicated to individuals, families, and groups. The facilities are top-class and we thank the management and staff at the Resort for their support.

“At the AGIF, our role is predominantly to provide support and organise part of the meeting, allowing practical training on the golf course. We are delighted to be supporting education programmes such as this.”

Emphasising the AGIF’s aim to support the entire industry, the field day was open to members and non-members of the Federation.

In 2016, the AGIF organised Turfgrass Management Seminars and Field Days in Indonesia, Malaysia, the Philippines, Singapore, Thailand and Vietnam. Plans are to run at least another five in 2017.

The AGIF has confirmed that the Vietnam Turfgrass Management Seminar and Field Day will be held at Hanoi’s BRG Legend Hill on April 27-28 with the Philippine Golf Course Management Conference at Cavite’s Orchard Golf and Country Club taking place on May 4-5.