Golf Business International chairman Howard Swan has followed in his father’s footsteps in undertaking a renovation programme at Moray Golf Club, in the north-east of Scotland. Swan, an architect with the third-generation family firm Swan Golf Designs, is now looking ahead to 2019 and the fourth year of a phased project on both the club’s courses, which will continue into the 2020s. 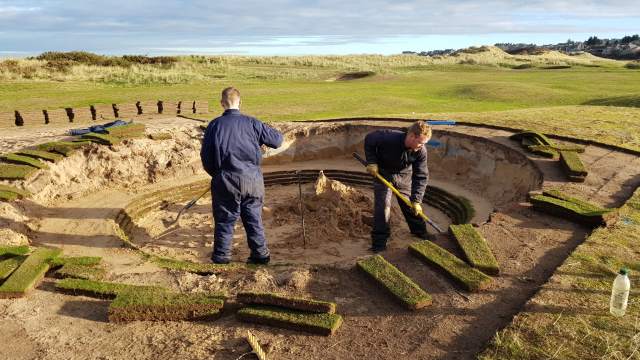 Swan’s father, Alex, laid out the New Course in the 1970s, alongside the legendary Sir Henry Cotton, while the Old Course, dating from 1889, has long been considered one of Old Tom Morris’ best, and is ranked in Scotland’s top 25 courses.

Four years ago, Swan visited the club, in Lossiemouth, to evaluate and appraise the 36 holes and see how they could be improved. That programme is now in its third year, with the most recent work seeing new bunkering created on the Old Course’s 14th and 16th holes.

Under the auspices of the experienced Swan, that work has been carried out entirely by the club’s courses manager, Kevin Thomson, and his greenkeeping team, complementing work already undertaken on the first and 17th, which have been redesigned and remodelled.

Simultaneously, the New Course is also undergoing significant renovation and upgrading, with the first, second and fourth holes already completed and is expected to climb the rankings.

Swan said: “I’m privileged to be able to work on a couple of such wonderful links courses, following my father to Moray and looking to achieve and satisfy the club’s aspirations.

“They want to see the courses elevated even further in the rankings and sit impressively alongside Royal Dornoch, Castle Stuart, Nairn, and Royal Aberdeen, as the most important links in the Grampian and Highland regions of the home of golf.

“There aren’t too many clubs which boast two such courses which are both so highly regarded by all who visit, and I’m now looking forward to phase four in which I anticipate that we will focus on three holes of the New Course.”

Formed originally as the Golf Consultants Association in 1999, Golf Business International, which rebranded in 2017 and is now a ‘preferred partner’ of England Golf, is unique in its ability to make available a team of highly respected and experienced golf industry professionals to deal with any aspect of the business of golf through from conception to end.