Soweto Country Club’s rebirth will be given another major boost when the refurbishment of the golf course begins by the end of the year.

The historic course was designed by native South African and the country’s most beloved sportsman, Gary Player. The World Golf Hall of Famer announced at his birthday celebration, held at Soweto Country Club, that he would gladly undertake the golf course redesign at no cost.

New fairways, bunkers, tee boxes, greens and an irrigation system are all planned. Officials are currently in the process of vetting possible service providers for the impending project, with the guidance and design approval of Gary Player.

“We have had incredible support from our partners such as the City of Joburg, Investec, Dimension Data, Telkom, SuperSport, PWC and several private sponsorships. This investment means we can now begin with the upgrade of the golf course as we continue to seek further funding to be able to complete the course upgrade,” said Nathan.

Gary Player, the designer of the original golf course and who has a longstanding history of supporting Soweto Country Club and its golfers, has again offered his assistance with this project.

“We are currently in the process of vetting possible golf course construction service providers for the impending project, under the guidance of Gary Player. The golf course will always remain a Gary Player design,” said Nathan. 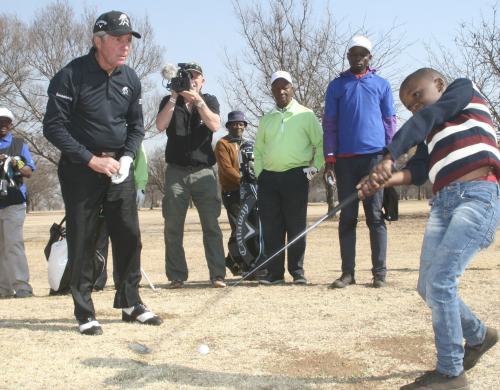 Naturally, the Black Knight is delighted with this good news. “Soweto Country Club plays an important part in the local community and deserves to be the very best it can be to represent Soweto and South Africa proudly,” said Gary Player.

The refurbishment of the golf course forms part of the overall upgrade of Soweto Country Club, which is already in an advanced stage. The project has already seen the building of a new clubhouse, a new practice facility, a conference centre, a new halfway house, and a fence has been constructed along two boundaries of the golf course.

The work currently in progress includes the building of a wall along the south boundary of the golf course, the refurbishment of an existing storage facility into a fully operational pro shop and a South African Golf Development Board Andrew Mlangeni Academy, and now the upgrades to the golf course itself.

Herman Mashaba, the Executive Mayor of the City of Johannesburg, also expressed his gratitude for the support of this project. The City of Johannesburg gave it further impetus by hosting a Mayoral golf day where all of the proceeds have been donated to the refurbishment of Soweto Country Club.

“The success of this project has been the success of the partnership between the public and private sector, and this is exactly what government needs to ensure the upliftment of our communities.”

Today’s Golfer, the Bauer Media-owned golf brand, has published a list of what it has judged to be the top 100 most influential people currently connected with golf.

European Ryder Cup Captain Luke Donald has announced 18 players, including a mix of Ryder Cup stars, Major champions and the most promising young players, to make up the Continental Europe and Great Britain and Ireland teams for next year’s Hero Cup in Abu Dhabi from January 13-15.

Chris Fitt, the Director of Golf & Leisure at Foxhills Country Club & Resort in Surrey, has been appointed as the new chief executive of Moor Park Golf Club in Hertfordshire.