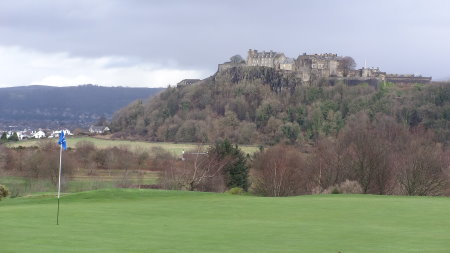 Golf has being played in the Kings Park in this old mid-Scottish town since 1869, if not from before, perhaps as long ago as 1505, with the original course being designed by as a seven hole layout by four times Open Champion Young Tom Morris when he was the first professional of the club.

In 1892 Old Tom Morris travelled from St Andrews to modify the layout to become a nine-hole course.  Since that time it was updated and extended to eighteen holes in the early 1900’s by Willie Fernie from Royal Troon. Thereafter two further multiple Open Champions James Braid in 1938 and in 1967 and 1968 Sir Henry Cotton oversaw its significant redesign to its current layout. Presently it stretches to some 6500 yards with a par of 72 and is considered one of the best clubs and courses in the central part of the home country of the game. It is extremely popular with visiting golfers to this part of Scotland, with Gleneagles close by, St Andrews not too far away and Edinburgh and the infamous Lothian links courses equally close.

It lies below the historic, impressive and outstanding Stirling Castle from where William Wallace defended his country so successfully against the English at nearby Bannockburn and from the higher parts of the course the views are simply stunning towards the Ochils and Lomond Hills to the East and the Trossachs and Southern Highlands beyond to the West.

Now Swan Golf Designs (SGD) has been commissioned to appraise and audit the design of the existing course and to prepare a ten year development plan for its future evolution. This will include an evaluation of its overall design, with particular reference to its safety – the old Stirling racecourse is accommodated within its eighteen holes and is free available to the general public walking through it, an assessment of the design,, condition and performance of its major components – greens, tees, bunkering – some of which have seen regular revisions and changes by successive committees over the years and will point the golf club towards a sustainable development and business plan for the long term.

James Lindsay, golf course manager at Stirling adds:  “This is a club and course of great history and tradition with a succession of famous golf course architects working on its design over the past 150 years or so. I am delighted that William and Howard Swan are beginning to apply their considerable professional talents to a ten year planning exercise for its further evolution and development. Far too many clubs take far too much of a short term view and courses often lose their way in going from pillar to post and the course pays for it. We don’t intend to do that at Stirling and we are looking forward to SGD’s assessment of the design of our eighteen holes and our practice facilities to point us in the best direction for their long term sustainability.”

It is anticipated that renovation work would begin in autumn 2014 with the first phases of the course’s re-bunkering and the initial stages of a restoration of the indigenous landscape character of the course with substantial planting of course and broom.

The work at Stirling is just one of the recent flurry of new instructions and commissions for SGD on a number of historically important and prestigious clubs and courses throughout Great Britain and Ireland.