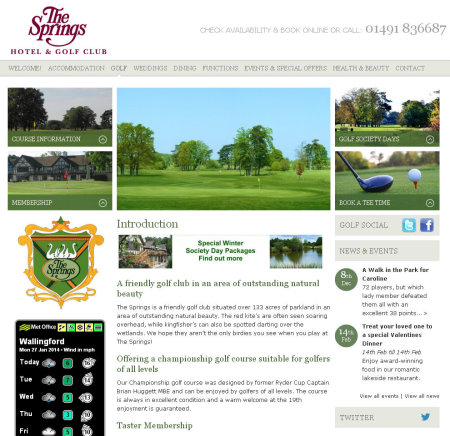 Svenla and Paul Franklin, owners of The Springs Hotel and Golf Club in south Oxfordshire, have announced that the Hotel is to cease trading at the end of October 2014 saying that due to their increasing costs they are unable to compete in the highly competitive hotel business. Their principal problem is that their hotel building is old and expensive to maintain.

The letter to members, however, reassures them that The Springs Golf Club, which has a modern club house, entirely separate to the Hotel, is in no way affected by the Hotel closure and will continue to operate as normal. The golf course was designed by Brian Huggett MBE and constructed by John Greasley Limited.

Indeed the shareholders say that they are keen to continue with their investment and aim to develop and grow the business, holding out the possibility that they will provide some ‘cost-effective’ accommodation in the near future to compliment the golf club and ensure its growth.