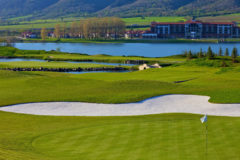 With the welcome re-launch of the PGAs of Europe’s 72-hole  PGA Professional Championship of Europe  now only six months away (Sep 27-30), the Pravets Golf Club in Bulgaria, where it will be staged after its six-year absence, is mounting ambitious preparations for the build up to the keenly-anticipated return of the prestigious event.

The golf club and course will be officially opened on 14-15 May with an invitation list of special guests attending a two-day celebration  while, with travel to the new location within easy reach of Sofia Airport an important factor, Bulgaria Air have become  Official Carrier for the event.

The cutting of the ribbon will mark the end of the final stage of the building of the luxurious Pravets Golf & SPA complex, which also features a RIU chain hotel, a conference center for 500 people, a 3000 square metres SPA center, an Olympic-size open pool, a casino and tennis courts.

Key figures from the political and business elite and show business will also attend while leading European tour operators have confirmed their intended presence. The doors of the course will also be open to everyone who wants to try the game or just to have fun. Saturday May 14th, will feature golf clinics and competitions for beginners in the Academy, demonstration of new models of Cleveland golf clubs, long drive competition and the like.

As official carrier of the opening, Renault will offer all guests a test drive of their new model – Latitude. The official part will take place at the end of the day, and will be accompanied by a cocktail and floodlit golf. The clubhouse will present its ProShop, locker rooms, restaurants and its traditional golf menu with fusion elements.

Bulgaria Air was named as the official air carrier of the PGA Professional Championship of Europe, after Lachezar Todorov, CEO of Terra Tour Service, the Investor Company, signed the sponsorship contract with the Bulgarian national carrier.

The 72-hole stroke-play tournament prize fund is €60,000 and will be competed for by an elite field of 60 professionals from the 31 full member countries who will qualify through their national PGA Championships. The event will be accompanied by a Pro-am tournament.

The official air carrier will offer a fixed price of €50 (airport taxes not included) for a return economy class ticket from all European destinations, served by Bulgaria Air operated flights, to the best professionals in Europe. The transportation of the sports equipment will be free of charge – a compliment by Bulgaria Air to golf, a sport still growing in Bulgaria. These exclusive ticket prices will significantly reduce the expenses of the participants on their journey to the title of The PGA Champion of Europe.

Braemar Golf-managed Pravets Golf Club is currently the most successful resort in Bulgaria.