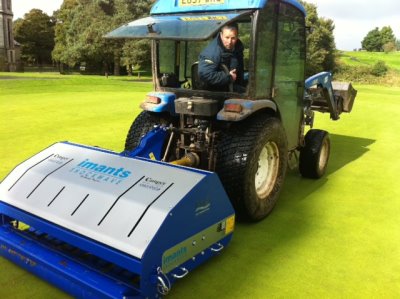 There is no doubt that we have had an awful lot of rain recently. Warren Bevan, Course Manager of the historic Lancaster Golf Club, is not a man to let the elements get the better of him, or at least not without a fight.

Ashton Hall, home to the club, dates back to medieval times when Kings of England strode through the grounds. Set in gently undulating parkland on the Lune Estuary it provides an impressive gothic backdrop to one of the UK’s most attractive golf courses.

The standard of the grounds has always been extremely high and remain so today. Following one of the wettest summers on record, Warren has had a real challenge to keep the course looking and performing at its best.

He has met this challenge head on by tackling flooding on the greens with a grim determination. “We had to combat the sheer volume of rainfall that threatened to overwhelm the greens.” said Warren.

To complement his existing maintenance armoury, he requested delivery of an Imants Shockwave 155 from Campey Turf Care Product Specialist Ian Campbell.  “I wanted to source a machine to tackle some deep seated compaction problems and encourage rapid dispersion of water in extremely adverse conditions.

“The worst case scenario would be to close the greens until the water subsides,” says Warren “but that’s not how we do things round here. When the course is closed it affects everything; loss of play, cancelled events, lost revenue. We want play to remain unaffected by the weather conditions for as long as possible, particularly now winter is approaching.”

The original course, measuring 6512 yards with a par of 71, was designed by James Braid in 1932.  At that time many of the greens were of clay-lined as was the order or the day. Nowadays they will be of a sand construction which aids aeration and efficient drainage.

“It is these older greens which are struggling to disperse the torrential rainfall,” said Warren. “The 18th green in particular normally takes a couple of hours to drain. With the recent levels of rainfall it is more likely to be 4-5 hours.

“Another consequence of the rain is also the change in footfall patterns in key areas. Our members are resolute and given the choice will be out in all conditions. To make it easier we purchased 10 new golf buggies 2 years ago and this has led to a dramatic increase in the use of trolleys and buggies along the traffic routes from tee to tee. The knock on effect, of course, is we now have more compaction along these routes and I am hoping the Shockwave will be able to address this as well.”

The Imants Shockwave is a linear decompactor, designed to revitalise heavy wear areas by relieving soil compaction, improving aeration and removing surface water. The important feature for Warren is the working depth – up to 250mm. This is deep enough to penetrate the sub soil layer and allow the water to flow more effectively into existing drainage lines and slits.

Six of the greens have been treated with the Imants Shockwave as have a large number of the traffic routes as well. The effect on the 18th green has been dramatic.

“I’m very impressed,” says Warren. “Following a sudden downpour we had standing water on the 18th green and to my surprise Ian agreed to operate the Shockwave in these extremely wet conditions. Within 20 minutes of completing a single pass over the entire green, the puddles had gone. The green was playable within 10 – 15 minutes. On less affected greens play was back on within 5 minutes.”

Warren has now applied to the greens committee to purchase his own machine. “We have demonstrated that we are willing to try everything and look at unusual or new maintenance techniques in order to keep the greens open all year round. The Shockwave will help us achieve that aim.”