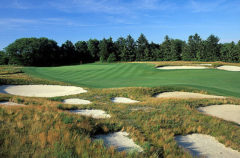 Shinnecock Hills Golf Club, in Southampton, N.Y., has been selected by the United States Golf Association as the site of the 2018 U.S. Open Championship. The dates of the championship are June 14-17, 2018.

“We are thrilled that our national championship will return to one of our country’s most-storied venues,” said USGA President Jim Hyler. “We are confident that Shinnecock Hills will provide a true challenge for the world’s premier players, as it has for more than a century.”

The 2018 championship will be the fifth U.S. Open to be hosted by the club, which is the only venue to host the championship in three centuries. In 1896, Shinnecock Hills hosted the second U.S. Open, and James Foulis won the championship by three strokes over Horace Rawlins. In 1986, Raymond Floyd shot a final-round 66 to break out of a tightly bunched field and win by two strokes over Chip Beck and Lanny Wadkins. In 1995, Corey Pavin clinched his two-stroke victory over Greg Norman with a memorable 4-wood approach to the final green. In 2004, Retief Goosen outlasted Phil Mickelson by two strokes to claim his second U.S. Open title.

“On behalf of our members, I am delighted to welcome the USGA and the U.S. Open Championship back to Shinnecock Hills in 2018,” said club President Robert A. Murphy Jr. “Shinnecock Hills is very proud of our common heritage with the USGA dating back to the origins of golf in America, and we are equally excited about our strong future together. We believe that our course offers a unique venue for championship golf that stands the test of any era, and are very pleased to have the USGA as our partner in sharing the challenge of Shinnecock again in 2018.”

Shinnecock Hills opened in 1891, and the present course was designed by William Flynn and opened in 1931. The 2018 championship will mark the 19th time the U.S. Open will have been played in the state of New York and the 10th time on Long Island. As of the 2011 season, New York has hosted 66 USGA championships, which ranks third among all states.

Along with The Country Club in Brookline, Mass., Newport (R.I.) Country Club, Chicago (Ill.) Golf Club and Saint Andrew’s Golf Club in Hastings-on-Hudson, N.Y., Shinnecock Hills was one of the founding clubs of the USGA in 1894. Shinnecock Hills had America’s first golf clubhouse (complete with locker room, showers and grill room), which was designed by Stanford White. It was also the first 18-hole golf course on the East Coast.